Skip to content
by Chuck Colbert
Here Media Inc. has rebranded its popular HIV Plus magazine, the country’s largest publication aimed at people with HIV and those who care about and for them, as Plus. 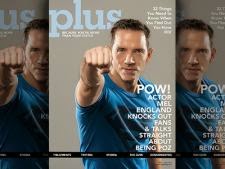 The new Plus brand, which launches with the magazine’s May/June 2015 issue, aims at removing the stigma that oftentimes affects people living with HIV /AIDS. By eliminating the stigmatizing language from its title, Plus lets its readers know that it understands them as more than just their status. Plus tells its readers, “You are you, plus a little something more,” according to a press release.
“We’re never going to stop covering HIV and the people impacted by it, but by losing those three
little letters in our magazine’s title, we both open ourselves up for people to feel free to read us anywhere without worrying about how it might look and issue an invitation to readers to broaden the conversation around wider health issues, especially among marginalized groups like gay and bi men, transgender individuals, and people of color,” said Diane Anderson-Minshall, editor-in-chief of Plus, in a press statement. “In my mind, we’re taking America’s number one magazine for people with HIV and supercharging it for 2015. We’re us, plus a little something more.”
As she explained in an opinion piece, published on the magazine’s website, “When HIV Plus magazine was founded in the 1990s, AIDS was at pandemic levels, HIV was a virus that researchers knew little about, and few people with HIV were expecting to live long, healthy lives. Today, as we publish issue 106, the landscape has changed and so have people living with or affected by HIV. Now the virus is like other manageable chronic conditions that require daily medications, much like diabetes, and people with it are living as long as their HIV-negative peers. They are often dealing with co-infections, like hepatitis C, and social stigma more troubling than the actual virus.
“That’s why it’s time for HIV Plus to rebrand itself as Plus, eliminating the stigmatizing language that leads with the virus, and recognizing and telling our readers we get it: You’re you, plus a little something more. Sometimes that’s HIV, hep C, another viral condition or STI, any one of those co-morbidities, all of which you can now read about in Plus without having to worry about whether carrying the magazine on the subway, reading it in your cubicle, or leaving it on your coffee table will automatically get you branded with the term HIV at first glance.”
HIV Plus’ award-winning online content will continue to be found at HIVPlusMag.com. The brand will also continue to publish its mobile app, the HIV Plus Treatment Guide, a comprehensive look at the medications approved by the Food and Drug Administration to treat HIV and opportunistic infections, as well as a state-by-state map of drug assistance programs, complementary therapies and drug trials.
HIV Plus reaches more than a quarter million readers each month with print and digital magazines, its website, and the HIV Plus Treatment Guide mobile app available on iTunes and Google Play.
IN THE NEWS
Volume 17
Issue 1


I like the name PLUS–and agree totally with editor-in-chief Diane Anderson-Mishall's rationale for changing the name from HIV Plus. We've known since the start of the HIV epidemic 34 years ago that the language with which we speak about HIV and those living with the virus can be stigmatizing–or empowering. I'm glad PLUS is going for the empowering. Now if we can only lay to rest the outdated term "AIDS"–as the Presidential Commission on the HIV Epidemic advised way back in the late 80s–we will have passed another milestone to making life with HIV that much more hopeful and normal.