Skip to content
by Joe Siegel
Options, based in Providence, R.I., is looking to regroup following the resignations of its chairman and several members of its board of directors.
“Due to financial reasons, the board of directors decided not to publish an August/September issue, and also decided to cancel the Gay 5K planned for September 22,” wrote Editor Jen Stevens in a message posted on an LGBTQ listserv. “Subsequently, several board members have resigned and new leadership is needed to keep this 37-year-old institution afloat. 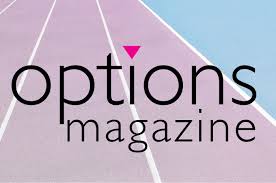 While Stevens, as editor, does not serve on the board, she offered to connect potential board members with the remaining members of the board.

The publication, which launched in 1982, has undergone many changes through the years, starting as a newsletter produced in conjunction with AIDS Care Ocean State and evolving into a glossy monthly magazine.
Options ceased publication in 2017 due to financial difficulties but relaunched in 2018.
“What we’re looking for is potential board members to come on and help run Options,” said board member Joty Allison.
The remaining board members had considered shutting down the print edition of the magazine and publishing online only. But readers expressed their support for the print edition.
“A lot of our sponsors prefer we have a print magazine as well,” Allison said, noting it was “so expensive” to produce.
Allison said that if the board of directors is unable to raise enough money, the print edition will be shuttered for good.
Stevens said work on the magazine’s October/November issue will proceed “thanks to a generous sponsorship from Blue Cross Blue Shield of Rhode Island.” The publication’s writing and design staff are intact.
Options’ management team intends to solicit feedback from the community to determine the magazine’s future direction.
“We know that Options must develop a more consistent and valuable online presence to compete in the digital age, and strides are needed to reach marginalized community members,” Stevens said. “We intend to hold a community meeting this autumn to assess how Options can best serve our diverse local LGBTQ community. We hope that readers will share their ideas and opinions to chart our path and reinvest in our mission.”
IN THE NEWS
Volume 21
Issue 6


Thanks for the article. A few points of clarification:
– Options doesn’t have a writing staff. All writers volunteer their contributions.
– Options started as a community newsletter without an official affiliation with AIDS Care Ocean State (ACOS). (The organization which would become ACOS many years later, FACTS, was founded in 1987.)
– Three total board members resigned: Board President TC Rogers (not referred to as a chairman), VP Melissa DaSilva, and another woman who never really got her feet wet with Options before leaving for another opportunity out of town.
– Jen Stevens, Editor-in-Chief of Options Magazine