Skip to content
by Chuck Colbert
Gaycation, a national monthly magazine about LGBT travel, has acquired The Word, an Indianapolis-based LGBT tabloid, and its sister publication, Up Downtown, from longtime owner and publisher Ted Fleischaker.
The Word will remain headquartered in Indianapolis and will continue to be focused on serving the needs of the LGBT community in the region.
The Word is Indiana’s only gay newspaper. Founded in 1991 to serve just Indianapolis, it’s now available in 7 states, including Indiana, Illinois, Michigan, Kentucky, Tennessee, Ohio and Iowa. Up Downtown covers the downtown area and provides downtown residents with the latest happenings.
“I really am proud to have started something such as these two publications, which have seen such widespread success,” said Fleischaker in a press statement.
Based in New York City, Gaycation Magazine (www.gaycationmagazine.com) publishes 10 issues a year and is focused on the sophisticated LGBT travel market.
The acquisition will extend Gaycation Magazine’s domestic media platform, particularly in the Midwest, helping to fuel its growth strategy. The deal will complement both publications by expanding key content vertically while also accelerating the digital evolution of both companies. 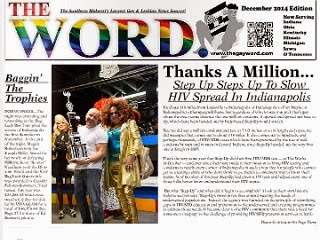 “The Word and Up Downtown are a perfect fit for our growing portfolio of news and travel media assets, and the name and rich heritage of both titles will be preserved independently, vastly expanding our overall print and digital platforms and extending our reach across the growing LGBT market,” said DJ Doran, publisher of Gaycation Magazine, in a statement.
“The Word enjoys a reputation as one of the most trusted and respected sources for LGBT news and entertainment across the various states and has a devoted and loyal audience. Its empathetic insight into Midwest gay news and culture is itself a remarkable resource and we will work hard to retain what Ted [Fleischaker] has built here in Indianapolis,” he added. “This acquisition will serve to broaden the boundaries of Gaycation Magazine, The Word and Up Downtown, and is another significant step in our strategy to establish a network of print and digital properties in not only the Midwest but also in emerging LGBT growth regions within the U.S. and beyond.”
In another move, Gaycation has also acquired Sydney, Australia-based Rainbow Tourism (www.rainbowtourism.com).
Founded in 2005, Rainbow Tourism grew from a few individual regional websites covering the South Pacific and Southeast Asia into a global umbrella site. Over the past decade, it has amassed thousands of pages of original content highlighting experiences and events for gay and lesbian travellers.
Celebrating its 10th anniversary this year, Rainbow Tourism has earned its reputation for exceptional travel content. “It has been a labor of love by a team of gay travellers about the places we know and places we go for work and play,” said Mark Proffit, director and technical editor, in a statement. “Early on we adopted a motto and lived by it: ‘Go gay. Stay gay. Play gay.'”
“We are thrilled that Gaycation Magazine and Rainbow Tourism embrace the same passion for delivering original and relevant travel content for our community. This latest addition substantiates our sheer determination to expand through strategic acquisitions that focus on the LGBT market,” said Gaycation publisher Doran.
“As part of the Gaycation family, Rainbow Tourism will jointly work towards growing both brands and delivering value to our readers and partners,” said Dee Farrell, director and editor at Rainbow Tourism. “Rainbow Tourism and its blog, www.gaytravel.in, will continue to report on current gay travel news and useful resources for our readers and social media friends.”
IN THE NEWS
Volume 17
Issue 1

HIV Plus magazine drops HIV in title, now just Plus