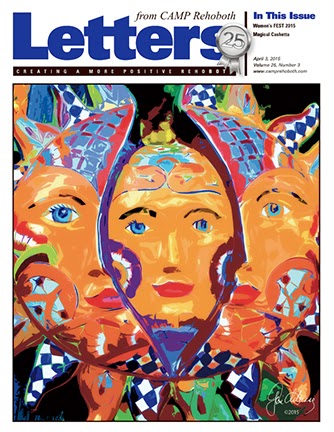 Key demographics: Rehoboth Beach is one of the premier LGBT resorts on the Atlantic Coast. Known as “The Nation’s Summer Capital,” we are the closest beach to Washington, D.C., Baltimore and Philadelphia. Based on the membership for CAMP Rehoboth, we estimate that our readership is approximately 70 percent LGBT and 30 percent straight.
Print run: 6,000 per issue. 15 issues per year — monthly from February to April, biweekly from May to August, and monthly from September to November. We do not publish in December or January.
Website: www.camprehoboth.com. Issues since 1997 are archived on our site.
*****
Press Pass Q: What section in Letters from CAMP Rehoboth is the most popular?
Elkins: CAMPshots, our 8-10-page photo coverage of local events, parties, restaurants/bars; Before The Beach, interviews with locals about what they did before moving to the area; features editor Fay Jacobs’ “Rehoboth Journal;” and CAMPmatters, community and CAMP Rehoboth related stories and commentary.
PPQ: How have readers responded? What feedback have you received?
Elkins: My favorite story is from the late 1990s. I was coming out of the Rehoboth Beach Post Office when an older woman — who I realized was Evelyn Thoroughgood, the unofficial historian of Rehoboth Beach — stopped me and asked if I was THAT person who printed THAT gay magazine. I said, “Yes, Mrs. Thoroughgood, I’m the one.“ Her response was that she was unhappy that we took a printing break in December and January. She thought we should publish all year long. You can never tell where your fans might be.
PPQ: What challenge or challenges has the publication had to overcome?
Elkins: Letters from CAMP Rehoboth is a program of CAMP Rehoboth, an LGBT non-profit organization serving the Rehoboth area. Both the organization and its magazine are celebrating its 25th anniversary this year. For all of those years, we have tried to make sure that the magazine serves both the mission of CAMP Rehoboth and the needs of the community. That can be challenging at times.
PPQ: What challenges are you facing right now?
Elkins: Right now, the organization and the production are still managed by the founders of the organization. We have a succession plan in place, but making sure that when the time comes, there are new leaders in place to carry on its work is always a part of the planning process.
PPQ: How has Letters from CAMP Rehoboth changed since it was first launched?
Elkins: The first issue was nothing but a four-page newsletter with only a couple of advertisers. In fact, one of the local gay businesses was afraid to advertise in it because they thought it might be too gay.
PPQ: What one change are you planning to make?
Elkins: We are constantly working to find ways to engage younger members of the LGBT community — through the ever-evolving social media — while not alienating our older audience. Our goal this year is to find a writer who can be the voice of that new generation.
PPQ: On the Kinsey Scale of 0-6 [exclusively straight to totally gay], how gay is your publication?
Elkins: Probably a 4. The magazine is on stands all over town and is read by gay and straight people. Most places in Rehoboth are gay and straight, and Letters reflects that makeup in its advertisers and readers. Since the publication is available for free all over town, our guide has usually been to ask if it is truly “streetable.”
PPQ: Do you see yourselves as “activist journalists”? If so, in what way?
Elkins: We are, but in a very gentle way. The success of CAMP Rehoboth, and our magazine, comes from our constant efforts to build connections with all the organizations in our area — as well as our relationship to people from the large East Coast cities nearby who make up our readership. Located right in the middle of downtown Rehoboth Beach, both the CAMP Rehoboth Community Center and our magazine are visible role models for a world where gay and straight live side by side.
PPQ: What’s the most surprising feedback you’ve received from a reader?
Elkins: Perhaps more inspiring than surprising, Letters has generated some very moving responses over the years — sometimes from LGBT people who needed positive role models and sometimes from straight supporters and readers learning how to deal with gay family members or any number of other issues.
PPQ: What is the biggest story or stories Letters from CAMP Rehoboth has covered in the past 25 years?
Elkins: Marriage equality. Delaware was one of the first states to allow civil unions and the 11th state to pass marriage equality. Plus, Delaware has passed laws covering gender identity and employment non-discrimination.
PPQ: What advice do you have for others working in LGBT media?
Elkins: It’s a rapidly changing world, but the more visible LGBT people have become, the louder our opponents are shouting. With social media, those extreme reactions are broadcast everywhere. We must continue to build a supportive environment for creating positive change, even in today’s world.
PRESSING QUESTIONS
Volume 17
Issue 1