Skip to content
by Joe Siegel
The results from the 22nd annual LGBTQ Tourism and Hospitality Survey — conducted by San Francisco-based Community Marketing & Insights (CMI) — have been released. And the findings are surprising.
On average, LGBTQ participants took 3.2 vacation or leisure trips and 1.4 business trips in the past 12 months. In addition, LGBTQs took an average of 2.3 trips primarily to visit family or friends in the past year. 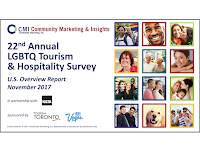 Twelve percent of married participants indicated marriage within the past year, slightly down from the year before (15%). CMI would expect the number of newly-wed LGBTQ couples to stabilize year-to-year as long-term same-sex couples have tied the knot in the past decade.
The most popular LGBTQ honeymoon destinations are Europe and beach destinations.
The survey was conducted last October by CMI. This report focuses on United States data for 3,703 self-identified members of the LGBTQ community.  Eighty-eight percent of participants came from a random sample of the CMI LGBTQ research panel. The panel was built over a 25-year period through partnerships with over 300 LGBTQ media, organizations and events. Twelve percent of the participants came from email/social media distribution from the following national LGBTQ media: Curve Magazine, GayCities, ManAboutWorld and Passport Magazine.
“One thing the data points to is that the LGBTQ community cares more about the LGBTQ-welcoming reputation of a destination, over having specific LGBTQ activities in the destination, like nightlife or neighborhoods,” said David Paisley, senior research director for CMI. “This means that any destination with more progressive policies and residents can develop its LGBTQ tourism.”
Other findings include:
American LGBTs are active international travellers — 77% of participants reported having a valid passport (compared to 36% of the general U.S. population). Among these passport holders, 53% used their passport in the past year to travel to another country.
Six percent of all respondents had a negative travel experience because of LGBT reasons. This number is significantly higher among gender expansive community members (16%). “Workers in the tourism and hospitality industry should not only be informed about LGB and same-sex couple concerns, but need diversity training on issues important to gender expansive travelers,” noted the report.
Interesting and unique tourist attractions, historic attractions and interesting neighborhoods are the top destination activities that LGBT travellers look for. Outdoor activities are important for women (46%), while men (44%) are seeking out LGBT-specific activities. Of interest is that “LGBT-friendly reputation” was the number 2 attribute for destination selection, but among activities, LGBT-specific dropped to the #5 rank on this question.
CMI has been conducting LGBT consumer research for over 25 years. Their practice includes online surveys, in-depth interviews, intercepts, focus groups (on-site and online), and advisory boards. Industry leaders around the world use CMI’s research and analysis as a basis for feasibility evaluations, positioning, economic impact, creative testing, informed forecasting, measurable marketing planning and assessment of return on investment. The survey was sponsored by Tourism Toronto and the Las Vegas Convention and Visitors Authority.
TOP STORY
Volume 19
Issue 10

CMI seeking partners for largest LGBT survey of its kind