Skip to content
What’s happening at your publication? Let us know. Email editor Fred Kuhr at editor@presspassq.com
GOGUIDE MAGAZINE, based in Iowa City, Iowa, announced it will be interviewing all interested candidates for elected office leading up to the June 25th Iowa primary. Issue dates are February 15, April 1 and June 1. The Forum will also appear online at GoGuideIowaCity.us beginning February 15 and remain available until the November general election. Several candidates have expressed interest in this series. Interested candidates include those running for Iowa Senate, Secretary of State, Governor and U.S. Congress. No endorsements by GoGuide Magazine will be made prior to the June 25th Iowa primary.
DOUGLAS BRAWN HOPKINS, co-founder of QCINEMA, Fort Worth’s Gay and Lesbian International Film Festival, passed away on October 7, 2017, at the age of 47. He is survived by his partner of 24 years, TODD CAMP.
HOTSPOTS, based in Oakland Park, Fla., has launched HOTSPOTS LIVE, a weekly show dedicated to the arts and culture scene in South Florida. It is available at HOTSPOTS.LGBT.
LAVENDER MAGAZINE, based in Minneapolis, recently won Excellence Awards from the Minnesota Magazine and Publishing Association. HUBERT BONNET and MIKE HNIDA won a silver and a gold award for design, layout, and photography. Assistant Managing Editor SHANE LUECK also won a gold for his writing. 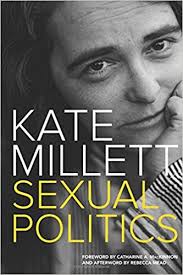 LIVING OUT, based in Woodbury, N.Y., on Long Island, entered its sixth year of publication with its December 2017/January 2018 issue.
KATE MILLETT, feminist, bisexual pioneer, and author of 1970’s “Sexual Politics,” died of a heart attack in Paris on September 6, 2017, at the age of 82. She was with her partner of 39 years, SOPHIE KIER. A memorial service attended by hundreds was held in New York on November 9, 2017.
NLGJA, THE ASSOCIATION OF LGBTQ JOURNALISTS, is now accepting online applications for its 2018 Excellence in Journalism Awards. The Excellence in Journalism Awards are open to anyone, including NLGJA non-members and journalists who do not identify as LGBTQ. This year’s Excellence in Journalism Awards program has been expanded to include three new categories: Excellence in Food Writing, Excellence in Long Form Journalism and Excellence in Queer People of Color (QPOC) Coverage. Work originally broadcast or published in 2017 may be submitted through March 12. Additional information on submission requirements and applications for Excellence in Journalism Awards are available online at www.nlgja.org/awards.
OUT IN JERSEY, based in Trenton, N.J., entered its 23rd year of publication with its December 2017/January 2018 issue.
OUTCLIQUE, based in Miami, entered its 2nd year of publication with its December 2017 issue.
PALETTE MAGAZINE, based in Miami and published by the MIAMI HERALD, has ceased publication after three years. Its December 2017 issue was its last one.
SOUTH FLORIDA GAY NEWS, based in Wilton Manors, Fla., won five prizes from the Florida Press Club’s Excellence in Journalism Contest. The winning info-graphic for the Illustration category was made by BRENDON LIES, SFGN’s art director, for the newspaper’s special issue on the transgender community last spring. The graphic showed the journey of a trans person in a chutes and ladders type of style. SFGN also took second and third place for the same trans issue mentioned above, and its special issue covering the aftermath of Pulse, the nightclub shooting in Orlando that claimed 49 lives. Freelancer CHRISTIANA LILLY took second place for Minority Reporting and freelancer DORI ZINN took third place for Community News writing.
TRANSITIONS AND MILESTONES
Volume 19
Issue 10