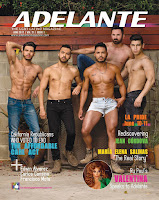 DALLAS VOICE celebrated its 33rd anniversary with its May 12, 2017, issue. (See the PRESSING QUESTIONS feature in this month’s issue of PRESS PASS Q.)
GED MAGAZINE, based in Long Beach, Calif., has unveiled a new feature, WEHO INSIDER, focusing on events, businesses and community profiles spotlighting West Hollywood.
THE LEATHER JOURNAL, based in Los Angeles, celebrated its 20th anniversary with its May/June 2017 issue.
BRAD LUNA and KRIS EINSENLA founded LUNA+EINSENLA, a strategic media and communications firm based in Washington, D.C., aimed at tackling leading policy and political issues. Luna previously served as communications director for the HUMAN RIGHTS CAMPAIGN. Einsenla is the former deputy chief of staff and communications director for Rep. DIANA DEGETT, a Colorado Democrat.
RYN MCCOY is the new editor of PQ, based in Portland, Oregon.
METRO WEEKLY, based in Washington, D.C., entered its 24th year of publication with its May 4, 2017, issue.
PHILADELPHIA GAY NEWS participated in Philadelphia Mayor JIM KENNEY’s “Ask Kenny” series on June 16, 2017. Kenney is working with a different media outlet every month to solicit questions. June’s effort focused on PGN and its reader’s concerns. Questions were sent in by email, phone, postal mail, and on social media with the hashtag #AskKenny.

QNOTES, based in Charlotte, N.C., entered its 32nd year of publication with its May 5, 2017, issue. In celebration, Publisher JIM YARBROUGH announced that the newspaper’s first 10 years, a total of 133 issues, were released online in an archival arrangement with the University of North Caroline at Charlotte. Issues from 1997-2016 are expected to be online in the near future.
THE RAINBOW TIMES, based in Boston, has launched a series of events throughout the rest of 2017 to help celebrate its 10th anniversary. First up was a Pride Kick-Off Sunset Cruise on June 23, 2017, departing from Salem, Mass.
THE WASHINGTON BLADE, based in Washington, D.C., staged an exhibit of iconic photographs from its archives at GALLERY 50 in Rehoboth Beach, Del., the weekend of May 19-21, 2017.
THE WINDY CITY TIMES of Chicago was one of the hosts of the CHICAGO EQUALITY RALLY, held on Sunday, June 11, 2017. The rally was held in solidarity with the EQUALITY MARCH FOR UNITY AND PRIDE in Washington, D.C.
TRANSITIONS AND MILESTONES
Volume 19
Issue 3

Use of word “queer” growing in LGBT news reporting