PPQ: Who came up with the name and what was the inspiration for it?

Schlegel: Collaborative effort between editor Lyn Collier and myself, with some feedback from friends. The inspiration for Spectrum is that we’re covering the entire spectrum of our community and will be inclusive of all orientations and gender expressions.
PPQ: On the cover of the magazine, under the name, it says “LGBTQIA+ |
Progressive.” Why do use you this and how does your coverage reflect it?
Schlegel: We are the first publication in Nevada that has specifically sought to be fully and fairly inclusive of all gender expressions and sexual orientations. We added the IA+ at the urging of the trans program at our local center. Naturally, others have urged us to be LGBTTIQQ2S or other variations. It’s very unwieldy and we may go back to just LGBTQ or LGBTQ+.
PPQ: What challenge or challenges is Las Vegas Spectrum facing now?
Schlegel: Finding the right advertising sales staff, which in turn, will allow us to expand our content and distribution.
PPQ: How has the publication changed since it was first launched?
Schlegel: Size. From 36 pages up to 48 and 60 pages. As veteran journalists, we pretty much had a vision of what we wanted and have held pretty clear to that plan.
PPQ: What one change would you like to make?
Schlegel: Better paper grade and more copies.
PPQ: What has been the biggest news story or stories has Las Vegas Spectrum covered?
Schlegel: We’ve tried to assist local organizations in getting their complete stories out. For instance, many have been angry with our local pride organization for perceived wrongs. We asked them direct questions about issues and let them explain. Most found the answers were good. 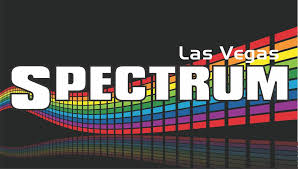 PPQ: On the Kinsey Scale of 0-6, how gay is your publication?
Schlegel: 4.5. We’re LGBTQ+, not gay, and some of our readers are allied progressives.
PPQ: Do you see yourselves as “activist journalists”? If so, in what way?
Schlegel: We are responsible, fair and accurate journalists. Our opinions are actively progressive. Our publisher has had an LGBTQ/Progressive endorsement group since 1996 when he published a previous LGBTQ news magazine. The Spectrum will actively be involved in getting the LGBTQ+ community to the polls and have advice on who and what to vote for.
PPQ: What’s the most surprising feedback you’ve received from a reader?
Schlegel: We do direct mail to same-gender households, using names we purchased from the county’s marriage license list. There are same-gender couples that are shocked we found them as they’ve never been active in the community and have mailed them free copies. Of course, we are like public radio, it’s free to get but we ask that they subscribe to make sure they get every issue. Our mailing list is larger than we can afford to mail, although we do direct-mail 6,200 copies. We hope to expand that to 12,000 in the future.
PRESSING QUESTIONS
Volume 21
Issue 7

Letter from the Publisher

GUEST COMMENTARY: Mayor Pete should remember he stands on the shoulders of history