Skip to content
by Joe Siegel
The practice of “outing” homophobic politicians and celebrities was widespread in LGBTQ media in the 1990s, but later died out.
A recent series of reports about U.S. Sen. Lindsey Graham’s (R-SC) sexual orientation has reignited the debate about outing.
The Daily Caller website reported on a recent Washington Blade story titled “Meet D.C.’s Most Eligible LGBT Singles.” Graham’s face appeared on the cover. 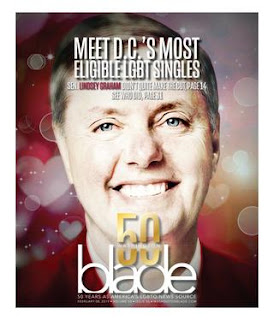 “There was a sub-headline that read, ‘Sen. Lindsey Graham didn’t quite make the cut,’ but did not clarify that the article about Graham was completely unrelated to the article about the eligible singles.”
Graham was actually mentioned in a different article entitled, “Is It Homophobic To Speculate About A Politician’s Sexuality?”
In that article, author James Wellemeyer asked whether or not it’s ethical to “out” politicians — and appeared to land on the position that, as long as the person has “done no harm” to the LGBT community, it’s probably not very nice to “out” them as a political tactic.
Sen. Graham has received a zero percent score from the Human Rights Campaign for each of his terms in office. He also opposed repeal of “Don’t Ask, Don’t Tell.” He has repeatedly denied being gay.
A 2010 story in QNotes, based in North Carolina, stated: “Twitter, Facebook and gay blogs are aglow after D.C.-based activist and blogger Mike Rogers announced on Twitter: ‘I wonder if Lindsey Graham knows I have pictures of a man who spent the night at his house.’”
Later, Rogers tweeted: “Just reached lawyer at home. Meeting set for Tues. on releasing pix of man who spent night at Lindsey Graham’s.”
“Rogers has outed several other high profile GOP elected officials and staffers, including (former Idaho senator) Larry Craig,” QNotes added. “None of Rogers’ several outings have ever proven false, a track record that’s landed him the infamous title, ‘Most Feared Man on Capitol Hill.’”
But according to QNotes publisher Jim Yarbrough, “I/we do not think it is acceptable to out someone in the LGBTQ or HIV/AIDS community unless they have done something that would harm the community in some significant way.”
Tammye Nash, managing editor of the Dallas Voice, has a similar viewpoint.
“If someone is closeted, we leave them alone as long as they leave us alone. But if they start trying to harm us, they are fair game for outing,” said Nash. “For instance, if we had credible evidence that First Baptist Church of Dallas pastor Robert Jeffress were gay, we would out him, because he consistently, deliberately and with much malice and forethought attacks the LGBT community and works against our well-being.”
“It is not our right to decide how any individual lives their life, in or out of the closet,” explained Mark Segal, publisher of Philadelphia Gay News. “Outing someone who is supportive of the LGBT community is exploitative and sensational. But there is one exception to that rule and there’s one word that explains it clearly: hypocrisy. If a public figure, who we know to be LGBT, speaks out against our equality, it would be our responsibility to call out the privilege of his/her closet.”
IN THE NEWS
Volume 20
Issue 12

Were we too quick to side with Jussie Smollett?