Skip to content
Interview with Editorial Director and co-founder Diane Anderson-Minshall and Editor in Chief Gerald Garth
by Joe Siegel
Location: Los Angeles and New York
Geographic coverage area: National (and via digital, international)
Year founded: 2018
Staff size and breakdown: A key staff of about eight editorial positions (not all are full time, since the same crew also produces The Advocate and Plus magazines)
Editor in chief Gerald Garth
Managing Editor Dimitri Moise
Senior Editor David Artavia
Production editor Jacob Anderson-Minshall
Associate editor Desiree Guerrero
Features editor Savas Abadsidis
Editorial director Diane Anderson-Minshall
Assistant to the editor Donald Padgett
Key freelancers include style editor James Brown III and sneaker editor Thomas Freeman as well as a handful of other rotating freelancers
Key demographics: A men’s magazine for young urban millennials who may or may not use labels to define themselves, which largely means the audience is young men of color, some gay or bi, some straight, many who eschew labels altogether
Website: www.chill.us
*****
PPQ: What feature or features of Chill magazine have been the most popular with readers?
Anderson-Minshall: Our cover stories, of course, are among the most popular because they’re usually rather incisive looks at some of the thought leaders in the worlds of entertainment and hip-hop. We get a lot of kudos for our style sections as well and our fitness sections (which are very much akin to Men’s Health but with Black and brown guys in them) are also popular. 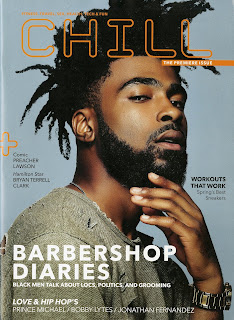 PPQ: Who came up with the name and what is the inspiration for it?
Anderson-Minshall: Our publisher Joe Valentino and I had been bouncing around the idea of this magazine for years, in part inspired by the number of Black men I had met that felt like there wasn’t a space for them in LGBTQ media or mainstream media. We knew from the outset our readers would be gay-friendly — that’s a must — but would be comfortable with a magazine that spoke to them and their friends regardless of orientation. We wanted the universality of men’s voices and began talking with Gerald Garth. As a Black man, Gerald was critical in framing the voice and tone of the magazine. The editorial team that works on Chill is almost entirely people of color, and that was critical to us.  We’re all about inspiration and empowerment, in looking and feeling good and being healthy, but we want to offer you a space to chill with it too.
PPQ: What challenge has Chill had to overcome since its inception?
Anderson-Minshall: Well, any new magazine launch has the challenge of convincing advertisers you’re worth their investment and that you’re reaching the audience you promise to reach. Fortunately, we had some early adopters and we already have new accounts lined up for 2019.
Garth: Chill has made some major strides. Overcoming concerns like inserting a new brand in the market can be a concern. But what’s great about Chill is the brand uniquely speaks to audiences that for a long time, have not had a voice – or rather, a very limited voice. Being able to showcase and bring to life the experiences of the millennial man of color is a value that Chill brings like none other.
PPQ: What challenge or challenges is Chill facing now?
Anderson-Minshall: We just put money into building a digital team that not just does digital content, but also audience engagement and social media trafficking. Our big challenge in the next couple of months is to really boost our digital followers, but I’m optimistic, not just because we’ve really finally had time to focus on that with our small team, but we’re using the power of Pride Media that has made our other brands the most viewed LGBT sites in the country.
PPQ: How has Chill changed since it was first launched?
Anderson-Minshall: We’re so new, I’m not sure we’ve had much change, but it does take a few issues to really hone your tone and style and voice, so clearly those things are much sharper now. And like any good media outlet, we’ve listened to our readers and followers and used their feedback to better tailor what we’re doing editorially.
PPQ: What one change would you like to make?
Anderson-Minshall: Well as editors we always want it to be bigger and better, so we’re eager for a page count increase in print, which will happen sometime in 2019 I bet.
Garth: I’m excited to see the brand grow. New partnerships, stronger visibility, and increased engagement. I’m also excited to see more contributors and more digital and video.  Just overall a bigger Chill!
PPQ: What has been the biggest news story or stories Chill has covered?
Anderson-Minshall: Our most recent cover story with Charlamagne the God is getting a lot of traffic and some media pick up, which I think is because it’s rare to have men talk about mental health, especially guys like Charlamagne.
PPQ: On the Kinsey Scale of 0-6 (exclusively straight to totally gay), how gay is your publication?
Anderson-Minshall: Let’s say 3. Our readers can be who they want to be without the baggage of labels, but surely among them some ID as gay, bi, trans, queer, SGL, and straight.
PPQ: Do you see yourselves as “activist journalists”? If so, in what way?
Anderson-Minshall: I definitely see myself as an advocacy journalist because you really can’t do a publication aimed at a niche audience (and face it, ours is quite niche if you look at men of color with complex personal identities) without being an advocacy journalist.

Garth: For me, activism is a way of life, particularly when you speak to the needs and experiences of underrepresented people. Some of the things Chill speaks to when it comes to young men of color, particularly Black and Latino men: mental and emotional wellness, sexual health and identity, knowing your rights, countering discrimination, but all through a social voice that really uniquely engages our readers.

PPQ: What’s the most surprising feedback you’ve received from a reader?
Anderson-Minshall: I’m always surprised by the number of white men or women (cis and trans) who say that even though they’re not our target audience, they feel like the magazine really speaks to them. And I recall Prince Michael (who is straight) and Bobby Lyte (who is gay) from the TV series “Love and Hip Hop: Miami” talking about places where gay and straight men can hang together and how Chill in many ways has created that space.
PPQ: What advice would you give to anyone who may want to launch their own LGBT website?
Anderson-Minshall: Figure out who your audience really is and make it as specific as possible. Don’t try to reach everyone; there’s great value in reaching a very specific niche audience. But within that, diversify as much as possible. We do not live in the LGBT world that existed even a decade ago, so our media absolutely shouldn’t look like we do.
Garth: Find your voice. Be able to speak passionately and well about issues and topics that are important to you and your communities. And respect intersections, respecting the places where multiple identities exist. For example, navigating the world as an LGBT person looks very different depending on race, location, religion, and so forth. Find spaces that allow you to specifically and authentically speak to the layers of one’s being.
PRESSING QUESTIONS
Volume 20
Issue 8