Skip to content
by Fred Kuhr
To celebrate Between The Lines’ silver anniversary, the Livonia, Mich.-based newspaper plans on revisiting milestones from the Detroit area’s LGBT history.
From June 2018 to June 2019, the newspaper will release regular historical graphics that take a look at some of the LGBTQ community’s greatest triumphs as well as some of the biggest bumps we’ve encountered on the road to equality, according to the newspaper in its June 7, 2018, issue.
This emphasis on examining our past is in keeping with Between The Lines’ primary goal — increasing LGBTQ visibility. According to Co-Publisher Susan Horowitz, being visible in the public eye is one of the most effective ways to fight LGBTQ discrimination. 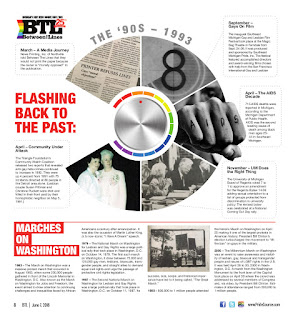 “All press, all news as the great, late Philip Graham of the Washington Post said, ‘is the first draft of history,’ and we knew very early on that our history was being lost by not being documented and recorded,” Horowitz said. “It was then that people went back, historians devoted themselves to LGBTQ history, and writers wrote books, and filmmakers made film and newspaper activists found their way to producing LGBTQ newspapers. And what the LGBTQ local newspapers do around the country is to continue to document the local community and what our challenges are, our success and our future may look like.”
According to Horowitz, Southeast Michigan provides no dearth of stories and content. “I mean we’ve published 35,000-plus articles. That’s an enormous number, that’s the equivalent of about 400 full-length books, documenting primarily Southeast Michigan and the state when we could and there wasn’t anyone out there that was going to do it,” she said. “We had to make that conscious decision, and what shifted so radically is the level of support from the allied communities both in advertising and in fighting the good fight with us. That’s been the huge shift that I’ve seen and am still seeing during my time at Between The Lines.”
In its first graphic travelling down memory lane, the newspaper revisits the year 1993, highlighting a number of stories including a printing company that refused to print the paper on moral grounds, the inaugural Southeast Michigan Gay and Lesbian Film Festival, and the March on Washington that year.
IN THE NEWS
Volume 20
Issue 4