Skip to content
by Joe Siegel
A recently released survey by AARP shows older LGBT adults worry most about three things: having adequate family and other social support to rely on as they age, discrimination in long-term care (LTC) facilities, and access to LGBT-sensitive services for seniors.
The survey, “Maintaining Dignity: Understanding and Responding to the Challenges Facing Older LGBT Americans,” found that both gay men and lesbians have similar concerns about whether they will have enough family or other social support. However, gay men are more likely than lesbians to be single, live alone, and have smaller support systems, which may put them at higher risk for isolation as they age. 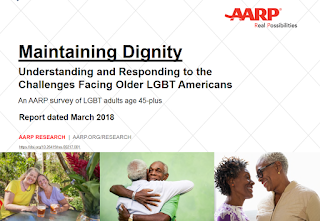 Many LGBT publications have made sure they are serving older LGBT readers by featuring issues of concern to them.
Philadelphia Gay News (PGN), for example, is the only LGBT newspaper with a regularly scheduled senior supplement, according to editor Mark Segal. In addition to the twice-yearly supplement, Segal says PGN has a regular column geared to the senior community.
The “number one issue” for LGBT seniors is housing, affordable living, and “being able to live in a safe neighborhood,” Segal said.
Chicago’s Windy City Times has featured many columns about the issue. For one, Serena Worthington, the director of national field initiatives at SAGE, wrote, “LGBT older people are twice as likely to live alone, twice as likely to be single, and three to four times less likely to have children — and many are estranged from their families.”
Editor Tracy Baim founded a group called Pride Action Tank, which hosted a major LGBT seniors summit last summer. Windy City Times also features interviews with aging LGBT activists, including a recent cover story about Gary Chichester. Chichester co-founded the Chicago Gay Alliance (CGA) in 1971 and served as its first president until 1973. CGA later opened the first LGBT community center in the city, started a newspaper, created an LGBT library, started a helpline and was instrumental in getting the first Pride parade off the ground.
Boston Spirit magazine runs a monthly column called Senior Spirit, which is aimed at readers 55 and up.
“The column has been running for about a year and a half and is very well received,” said publisher David Zimmerman. “We work very closely with many of the organizations in the area on the content for this column. One such organization is the LGBT Aging Project, which is part of [community health center] Fenway Health. As an example, the current Senior Spirit article details a recent study on the role that stress plays in the lives of older LGBT people.”
New York-based Gay City News has also ran many stories about the obstacles LGBT seniors face, including discrimination in housing. Editor Paul Schindler wrote a February 2015 column titled, “Our Seniors Need Housing and Community.” The newspaper has also featured several “first-person” narratives about the lives of LGBT seniors.
PGN’s Segal said older LGBTs are also suffering from what he refers to as “battle fatigue.”
“Many of us, as seniors, are still dealing with how we [handled] the AIDS epidemic” in the 1980s and ‘90s, Segal said. “We were the frontlines, we saw what it was like. We watched as 600,000 people in our community died. Each and every one of us lost scores of friends, if not the ones we loved. We are still scarred by that.”
Segal noted that these are issues that much of LGBT media does not want to address. “There’s a huge amount of information out there, but unfortunately we seem to be an ageist community, so we shy away from those issues.”
TOP STORY
Volume 20
Issue 1