Skip to content
by Fred Kuhr
Bay Area Reporter, based in San Francisco, and Out In The Mountains, which was Vermont’s only LGBT newspaper from 1986 to 2007, now have some or all of their archival issues online.
The GLBT Historical Society in San Francisco has been leading the effort to digitize back issues of Bay Area Reporter, which began publishing in 1971. Readers can access a digital archive of articles published as far back as 2005. But older articles had only been available at the Society’s physical archives or on microfilm in libraries.
But the Society announced last month that they now have complete issues from 1995 to 2005 posted and full searchable.

“For the first time, readers from all over the world will be able to conveniently access the nearly 50-year archive of the BAR,” said publisher Michael Yamashita in a BAR article about the effort. “It’s fascinating to browse through the years and appreciate what the LGBTQ community has achieved in San Francisco.”
“The completion of digitizing the BAR’s archives is a milestone,” said longtime news editor Cynthia Laird in the newspaper. “I regularly receive calls from researchers, students, and others wanting to access old issues of the paper and have had to refer them to the hard copies at the historical society or the microfiche ones at the library. That may work for people who are local, but was not practical for those outside the Bay Area. Now, they will have immediate access.”
The archives are hosted on two different sites.  According to the Society’s website, “The two partner sites offer distinctive interfaces and differing functionality – and each is posting the back issues at a differing rate.”
The California Digital Newspaper Collection site returns the most comprehensive results for keyword searches. A free account is required if you wish to download PDFs. This archive currently includes all issues from January 2000 through July 2005. To search here, go to https://cdnc.ucr.edu/cgi-bin/cdnc?a=cl&cl=CL1&sp=BAR
This Internet Archive site provides the most effective access for browsing or reading issue by issue and page by page. You can download PDFs without registering for an account. Currently includes all issues from January 1994 through July 2005. To search here, go to https://archive.org/details/bayareareporter&tab=collection
The Bob Ross Foundation, named after BAR’s founding publisher, who died in 2003, donated $50,000 to the historical society in 2016 to purchase the state-of-the-art equipment needed to digitize the newspapers, the BAR’s story explained. 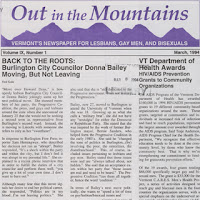 Terry Beswick, executive director of the Society, was a freelance reporter for BAR in the mid-1990s and joined the staff as a full-time news reporter in 1999 and 2000. And former BAR publisher Thomas E. Horn is president of the Bob Ross Foundation, which has a minority ownership stake in the newspaper. He told BAR that the digital archival collection will be “an indispensable tool” for telling the LGBT community’s story.
On the other side of the nation, the entire print run Out In The Mountains (OITM), which was based in Burlington, Vt., and ceased publication in 2007, is now part of the digital collection of the University of Vermont Libraries.
OITM was the only LGBT publication serving the Green Mountain State. It was also the home publication for cartoonist and Vermonter Alison Bechdel’s “Dykes To Watch Out For” comic strip. The newspaper also refused to print advertisements for alcohol or cigarettes. After making the transition from newsletter to newsprint in the mid-1990s and forming a non-profit board to ensure its continued success, it folded due to financial hardships. (Press Pass Q editor Fred Kuhr was editor of OITM in the mid-1990s.)
To access the archives, go to https://cdi.uvm.edu/collection/uvmcdi-uvmcdioutinthemountains
IN THE NEWS
Volume 19
Issue 11