Skip to content
by Joe Siegel
XY Magazine, which is aimed at young gay men, has resumed publication after an eight-year hiatus.
The new XY #50 — at nearly 200 pages — went on sale the week of October 10 at Barnes and Noble, Books-A-Million, Hudson News in New York City, and other bookstores nationwide. It is also available by mail from www.xymag.org.
The issue is called “Wonderland” and considers the future of America. “We were always known for criticism, but in this case we considered the future of America without mentioning anyone in or out of the LGBT movement,” editor Peter Ian Cummings said. “Instead, all the writers discussed what we lost and what we miss — the way that a massive increase in inequality has caused a decline in intimacy.” 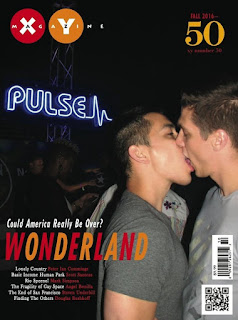 However, XY #50 does not mention a single company, a single LGBT organization, a single famous name, or even the word Trump.  This was intentional, according to Cummings: “We wanted to talk about the myth of the pursuit of happiness instead.”
Cummings, the former international editor of The Advocate, created XY in 1996 in San Francisco. XY ran from 1996-2008 and was one of the world’s four biggest gay magazines. XY ran the largest social networking site for young gay men, XY.com.
XY closed during the financial crash of 2008. When XY’s staff and investors could no longer reach a financial agreement, the straight investors forced XY into liquidation and sold off the valuable XY.com domain name to a Chinese game developer.
The new XY team includes not only Cummings, but Denise Penn (former news editor of Lesbian News and Bi Magazine, member of the Executive Committee of the California Democratic Party); Tyrese Curtis (youth ambassador for SMYAL, who writes about coming out at 12); and Douglas Rushkoff, a producer of PBS “Frontline” (who writes about finding intimacy in an atomized age).
Although the magazine is headquartered in West Hollywood, Cummings, Curtis and Penn produced this issue in Washington, D.C., because of this issue’s national theme. The magazine features an interracial teenage couple (including Curtis) at the Martin Luther King and FDR monuments in Washington. Photographer Steven Underhill also contributed to the issue.
XY often criticized corporations for not advertising in the gay press, and criticized the LGBT movement for being too assimilationist and not supporting sexual liberation. That stance and its photography made XY very controversial, but also led to it having the highest newsstand sale of any LGBT magazine from 1997-2005.

In an unprecedented move, all 12 of the country’s longest-serving and most award-winning LGBT newspapers are each separately endorsing Democratic Hillary Clinton for president of the United States.