*****
PPQ: What feature or features of Between the Lines have been the most popular with readers?
Co-Publisher Jan Stevenson: Entertainment features with celebrities, local news coverage especially about intra-LGBT politics, and local op-eds.
PPQ: Who came up with the name and what is the inspiration for it?
Stevenson: We actually inherited the name. The paper was started in 1993 by two University of Michigan students and they thought of it as a little subversive, not out in the open. So Between The Lines suited them, and we just kept it. 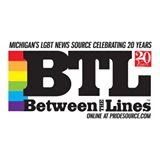 PPQ: What challenge has your publication had to overcome since its inception?
Stevenson: The biggest challenge was the economy in Detroit, which took a body blow in the mid-2000s. Things are much better now economically in the auto industry, which still drives everything in this region. Also, the City of Detroit emerged from the largest municipal bankruptcy in American history and is now on the upswing.

PPQ: What challenge or challenges is Between the Lines facing now?

Stevenson: Keeping up with ever-changing technology and how our readers access information. Our website is extremely busy with tens of thousands of unique users every week, and we are constantly looking at ways to attract more online readers. Monetizing online activity is still a big challenge.
PPQ: How has Between the Lines changed since it was first launched?
Stevenson: It started as a small monthly out of Ann Arbor. Now it is widely recognized as a major source for LGBT people and their allies on the issues that matter most to them.
PPQ: What one change would you like to make?
Stevenson: More time in the day – ha! Seriously though, I would like to have a better economic model for online advertising revenues. Many advertisers, especially large companies, expect to get online exposure as value added with a print buy. It deflates our ability to monetize the web presence and build a stronger online product.
PPQ: What has been the biggest news story or stories Between the Lines has covered?
Stevenson: Marriage! The DeBoer-Rowse couple from Hazel Park, Mich., was the couple that challenged the legality of marriage equality all the way to the Supreme Court. Their four-year journey captivated our readers. They started out with three children and by the time the case went to the Supreme Court they had adopted two more – all special needs kids. These two nurses are remarkable people and Between The Lines was honored to share their amazing stories with our community.
PPQ: On the Kinsey Scale of 0-6 [exclusively straight to totally gay], how gay is your publication?
Stevenson: I’d say we are a 5.5 – and the only reason we are not a 6 is because we cover other progressive issues that intersect with LGBT issues, like women’s rights, minority issues, and economic disparities that cause injustice.
PPQ: Do you see yourself as an ‘activist journalist’? If so, in what way?
Stevenson: Definitely. Susan Horowitz and I both identify as activists and have extensive activist credentials from both before and during our publishing careers. Both of us feel that the paper is an organizing vehicle that can mobilize the LGBT community and our allies to work towards more equality.
PPQ: What’s the most surprising feedback you’ve received from a reader?
Stevenson: I don’t know how surprising it is, but many times we have heard people tell us that Between The Lines was their first – and sometimes only – connection to the LGBT world and that reading the paper every week gave them the resources and the courage to finally come out. It’s gratifying and humbling to know that people rely on the paper for information, connection and meaning.
PPQ: What advice would you give to anyone who may want to launch their own GLBT publication?
Stevenson: Be ready to work your butt off! Also, do this because you love the community and want to help make things better. If it’s strictly a job for you, or a scheme to get rich, it won’t work. Go work at a bank.
PRESSING QUESTIONS
Volume 18
Issue 6