Skip to content
by Joe Siegel
The Rainbow Times (TRT), based in Boston, had one of its distribution boxes destroyed in an explosion on August 23 in the town of Salem, Mass.
Security camera footage revealed a group of seven people lingering around the newspaper box, then running from the scene. Moments later, the flash of light from the explosion fills the screen. The Salem Police Department shared the video on its Facebook page. The video has been viewed more than 75,000 times.
“The explosion rocked the downtown area and was heard up to a mile away prompting numerous calls to the Salem Police,” the department wrote on Facebook. “We are asking the public’s assistance in helping to identify these individuals.” 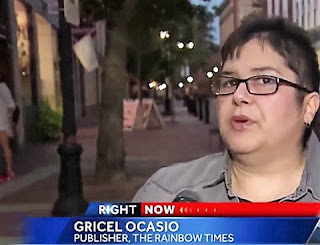 The Arson Watch Reward Program is offering a reward of up to $5,000 for information that helps solve the crime.
The Rainbow Times has been subjected to similar incidents in the past. Someone vandalized the boxes in June during Gay Pride Month.
According to its publisher, Gricel Martinez Ocasio, who published a lengthy statement on the paper’s website, TRT has filed about 10 reports with the Salem Police Department about boxes being defaced.
Mayor Kim Driscoll, who is featured on the cover of the August edition, called the incident a “cowardly act.”
“This cowardly attack runs contrary … to what it means to be a city whose very name means peace,” Driscoll said.
In a show of support for TRT and the LGBT community, the Mayor’s Office, the City of Salem and NAGLY (North Shore Alliance of Gay, Lesbian, Bisexual and Transgender Youth) responded by offering 3’×5’ rainbow flags for business owners to display at their establishments.
Additionally, a series of these flags were displayed from one side of the street to the other at the intersection of where the explosion took place.

“TRT encourages business owners and individuals who would like to display the rainbow flag and stand in support of our beloved LGBTQA community to make a donation to NAGLY who is distributing these flags,” said Nicole Lashomb, TRT editor in chief. “We are ever so grateful for the outpouring of support received by the local Salem community, city officials, the Salem PD, the Massachusetts State Police, the Fire Marshall’s office, the Mayor’s office and countless others throughout New England and the nation.”
Jeff Cohen, chairman of Salem’s No Place for Hate committee, said he sees a lot of hate crimes across the region, but noted that there have been “a lot more people acting out” since the presidential election began seeing incendiary rhetoric.

Cohen said he believes that people see Salem as an example of a diverse, inclusive community, not just on the North Shore but nationwide. But even Salem can be the site of bigotry. “It’s not how far we’ve come, it’s how far we’ve got to go,” Cohen said.

A replacement newspaper box was placed at the site. Ocasio said other boxes will be set up across Salem, noting the latest incident will not scare the paper away.
“We are going to stay here,” Ocasio said. “This gives us more incentive to go ahead and promote not only the message of the paper, but the inclusion that this beautiful city is all about.”
IN THE NEWS
Volume 18
Issue 6

PRESSING QUESTIONS: Between the Lines of Livonia, Michigan