Skip to content
by Joe Siegel
What’s in a name? In the case of Out Front, everything — including its very existence.
The Denver-based LGBT magazine is ensconced in a legal battle with Outfront Media Inc., one of the country’s largest outdoor advertising businesses.
The problems for Out Front began in 2014, when CBS Outdoor rebranded itself as Outfront Media Inc. and spun off to become a stand-alone public company with “OUT” as its ticker symbol.
The change has resulted in much confusion, according to Out Front’s owner and publisher, Jerry Cunningham. Cunningham has owned Out Front since 2012. 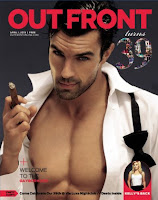 Cunningham has received phone calls from people wanting to buy ads on billboards they saw on highways. The confusion has escalated to the point where even local advertisers for Out Front have sent payment for ads to Outfront Media Inc., which is based in New York. The billboard company’s own lawyers have sent Cunningham’s business legal bills by mistake.
Another problem is Outfront Media sells billboard space to Chic-fil-A and other brands the LGBT community considers antagonistic, confusing readers of the magazine and advertisers trying to reach them.
Out Front was started in 1976 by Philip Price, who died in the 1990s. Its twice-monthly print run is 12,000 copies. Its website draws traffic from around the world as well as national advertisers, Cunningham noted.
Although Out Front had worked with one of its advertisers to correct the error, Cunningham said, the publication is still experiencing problems with advertisers sending payments to Outfront Media.
“We met with [the advertiser’s] attorneys and explained what was going on and set the record straight, and less than a week later, they sent the payments wrong again,” said Cunningham.
Cunningham’s company, Q Publishing Group, filed a lawsuit against Outfront Media Inc. in federal district court in Denver in February 2015 claiming unfair trade practices and misappropriation under Colorado common law.
Cunningham hopes the court date will be set before March. He wants the opportunity to set the record straight about Out Front.
“We believe this is a fight that’s more than just principle, this is just wrong on all business levels,” Cunningham said.
Cunningham noted that Out Front’s sole source of revenue is from advertising, just as Outfront Media’s sole source of revenue is also from advertising.
“You can’t adopt the same exact logo as someone that’s already been in the industry for 40 years regardless of whether you have a trademark or not,” Cunningham said. “We never thought we had to trademark [the Out Front logo] because it’s been in existence for 40 years.”
Outfront Media denied that it was competing with Out Front magazine and website, according to the company’s legal response.
TOP STORY
Volume 17
Issu 11