Skip to content
by Chuck Colbert
This fall, Windy City Times, Chicago’s only LGBT newspaper, will mark its 30th anniversary with a large celebration at the city’s popular Sidetrack bar on Sunday, Sept. 27.
In advance of the celebration, Windy City Media Group (WCMG), the company that produces Windy City Times, announced a number of changes. 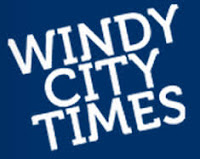 First, the company has launched a $30 for 30 Years Indiegogo campaign for its award-winning investigative journalists and their work covering the LGBT community. Windy City Times has always been a free weekly newspaper, and the funds raised will cover editorial projects (https://www.indiegogo.com/projects/windy-city-times-30th-anniversary/x/396864#/story). The fundraising goal is $30,000 and has nearly been met.
Second, Nightspots — a biweekly, glossy nightlife guide — has merged into the weekly edition of Windy City Times. Nightspots started as an insert publication called Nightlines, but 25 years later WCMG thought the next step in its evolution was to offer weekly coverage in its sister publication, with four-color photos on a weekly basis, rather than just twice a month.
Kirk Williamson, Nightspots managing editor and art director, continues as the leader of Nightspots, which will offer the same breadth of coverage while adding new features. Nightspots has also expanded its presence on Instagram, Twitter and Facebook. “I am so excited about moving Nightspots in new directions online, and into the weekly pages of Windy City Times. This gives us a much quicker turnaround in covering community events,” he said.
Tracy Baim, publisher and executive editor of Windy City Times, explained the rationale for the change.
“Nightspots, as a biweekly magazine-style bar guide, was our only print product with direct competition from two other biweekly bar guides,” she said in an email. “Even though Nightspots is the oldest, we felt because we already have a weekly print presence with Windy City Times, we could roll the coverage into Windy City Times, and spend more resources posting current bar photos and features online and weekly in Windy City Times, plus on social media. So it was a matter of making it more timely in print and online, and cutting costs on a free-standing print product.”
In yet another change, WCMG has discontinued Windy City Queercast (WCQ), a weekly podcast of news and entertainment. WCQ, formerly known as Lesbigay Radio, was the nation’s first daily LGBT radio program airing in the late 1990s in Chicago. The program transitioned into Windy City Radio on the FM dial before the launch of WCQ in 2006. Amy Matheny has been the host of WCQ, Windy City Radio, and Lesbigay Radio for 17 years. This made her one of the longest running hosts of an LGBT radio program in the U.S.
“It has been a privilege to be in conversation with thousands of members of the LGBT community these past 17 years,” Matheny said in a press release. “I have worked alongside exceptional co-hosts over the years, including Alexandra Billings, Mitchell Fain, Stephen Rader, Deb Pearce, Colman Domingo, and Miss Cleo. We did incredible ground-breaking work and WCQ gave voice to the LGBT community in a deeply personal way.”
Matheny will continue her work as senior account manager with WCMG.
“Matheny decided it was time to stop,” said Baim, adding that it was really a labor of love for her and her team, “so we did not want to continue it without her leadership. It was not a revenue generator, so we felt it was something we could stop.
The more than 600 editions of Windy City Queercast will remain online, as will all of the digital archives of Nightspots, which has published more than 1,100 issues.
IN THE NEWS
Volume 17
Issue 5