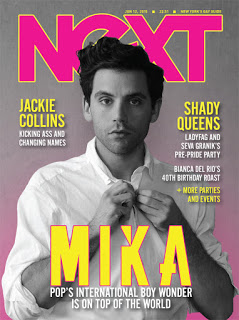 Multimedia Platform’s current vice president and chief operating officer, Kevin Hopper, has been appointed publisher of Next; and the magazine’s current editor-in-chief, John Russell, will remain on board to spearhead Next’s editorial and creative direction. The magazine will remain headquartered in New York City.
In a July 2 editorial for Next, Hopper spoke of future plans. “Going forward, our goal is to set a new standard of quality for LGBTQ news and entertainment journalism both online and in print, and to do so while offering advertisers, hands-down, the absolute best value for their dollars,” he wrote. “This means some changes are on the horizon: new additions to our content under the leadership of editor-in-chief John Russell, expanded distribution, increased community outreach, monthly networking events, and a redesign of NextMagazine.com, among other exciting prospects.”
At the same time, Hopper explained, “We will remain New York’s premiere guide to the city’s gay social scene, retaining the nightlife reporting, entertainment coverage, and fascinating celebrity profiles that our readers have come to expect from us for the past two decades.”
“This is a huge opportunity for Next to grow as a brand,” said Russell, in a press statement. “We’re looking forward to taking the magazine to the next level.”
David Moyal, founder of Next Magazine, offered his perspective, in a press statement. “We are extremely excited to have finalized our agreement with [CEO Bobby Blair] and Multimedia Platforms. I firmly believe in his vision and the strategy that the company is embarking on as evidenced by my decision to accept approximately 80 percent of the terms of our agreement in Multimedia Platforms equity. It is a vote of confidence in the team and long-term prospects as together we will continue to give the LGBTQ community a strong voice.”
“We are pleased to purchase a globally recognized brand with 23 years of publishing the highest quality content in one of the most sought after media markets in the world,” said CEO Blair, in a press release. “We will be connecting the global LGBTQ community, businesses, and advertisers for the first time by providing news, entertainment, and connections through print, online, and social media channels. Advertisers and businesses will benefit from the flow of information through the ability to quickly deploy content via one centralized location. We are currently in advanced discussions to continue rolling-up and consolidating the fragmented LGBTQ media market.”
IN THE NEWS
Volume 17
Issue 5