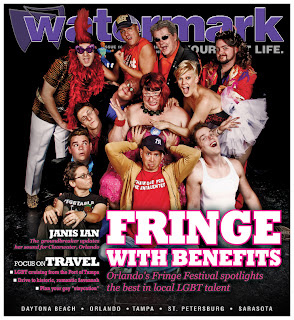 Staff size and breakdown: 12 full-time staff members, over 20 contributors; publisher, chief financial officer, editor, online editor, sales manager, 3 sales associates, creative director, creative assistant, reporter, administrative assistant
Physical dimensions of publication: 11” x 12”
Average page count: 56
Area of coverage: Sarasota, Tampa Bay and Orlando
Key demographics for readers: 81 percent between 25-54; $95,000 average household income; 68 percent own a home
Median age of readers: 36
Print run: 15,000
On the web: watermarkonline.com
*****
Press Pass Q: When did you launch your publication, and what inspired you to do it?
Publisher Tom Dyer: The first issue came out on August 31, 1994. Orlando had a growing LGBT community with few ways to communicate with each other or to share things of importance. I felt like the lack of a newspaper was holding us back. But what really inspired me was a trip to Atlanta. I was eating lunch in a restaurant in Virginia-Highlands and saw a half-dozen people reading their just-delivered Southern Voice. It was something I wanted for Orlando. Watermark expanded to cover Tampa Bay in 1995.
PPQ: What, if anything, distinguishes your publication from other LGBT newspapers, magazines and online publications, and how much competition is there in your area for LGBT-specific news and advertising?
Dyer: Other than our longevity, I’d say we’re distinguished by a crisp, eye-catching design that is a true hybrid of newspaper and magazine. The competition for advertising dollars mostly comes from local alternative weeklies that now have substantial coverage of the LGBT community. There’s no other LGBT newspaper in the area. There are two or three statewide bar/nightlife magazines.
PPQ: What were your greatest challenges in getting it up and running?
Dyer: We were undercapitalized, so things were very tight for the first two to three years. I worked long hours and took no salary while trying to stay on top of a law practice.
PPQ: Is it successful now, and how do you gauge that?
Dyer: I’d call it a success. Watermark is going into its 19th year. We’re the newspaper of record for the very active and thriving LGBT communities in Tampa Bay and Orlando. Our web site is updated daily and gets lots of traffic. We own an office complex in a great neighborhood in downtown Orlando. We pay competitive salaries with full benefits to a dozen people. We have a respected and experienced staff. I’m happy and proud.
PPQ: Have you experienced significant changes in publication size, and when did you see that occurring?
Dyer: From 2002-2007, almost 30 percent of our advertising was related to the booming real estate market. By 2008, that had completely evaporated, and our page count went down. But we’ve adapted, and real estate advertising is coming back.
PPQ: Are you facing new challenges and what are they?
Dyer: The biggest challenge is managing this interesting, exciting, confusing time when we still have tens of thousands of print readers, but our biggest growth is in online readership. If there’s a local LGBT publication that’s successfully monetized their web site, I’d love to hear from them.
PPQ: How does the publication differ now from its original inception, and what is the most popular feature?
Dyer: When Watermark first came out back in 1994, it was a real coup to get interviews with celebrities like Lily Tomlin, Billie Jean King and Gloria Steinem. Those interviews were often the centerpiece of the publication. Now that LGBT culture has mainstreamed, our biggest focus is on local news, where a lot of exciting things are happening. Orlando just elected on out state legislator – a first for Florida. Orlando, Tampa, St. Petersburg, Clearwater and Sarasota all passed domestic partner registries in the last 18 months.
PPQ: What’s the most surprising feedback you’ve received from a reader?
Dyer: I continue to be surprised by filters based on perception. People from Tampa Bay think we focus on Orlando news; in Orlando, some think the whole paper is about Tampa Bay. The same goes for men and women, coverage of the transgender community, etc. My hope is that people will find all of the content – and all aspects of our diverse culture – interesting.
PPQ: What advice do you have for others working in LGBT media?
Dyer: I’m 57 and resist change. I just started reading the New York Times on my iPad, so I now have at least some comprehension of the future. So I’d say try and stay ahead of – or at least not too far behind – the new media curve. It’s exciting, and there’s lots of opportunity. Of course, the advice you give is usually the advice you need.