Skip to content
by Joe Siegel
GoGuide, based in Iowa City, has been interviewing many of the Democratic presidential candidates in anticipation of February’s Iowa caucuses. Some, however, have been easier to approach than others, according to publisher Tim Nedoba.
To date, GoGuide has spoken with Andrew Yang, Marianne Williamson, John Delaney, Sen. Amy Klobuchar, and South Bend, Ind., Mayor Pete Buttigieg. 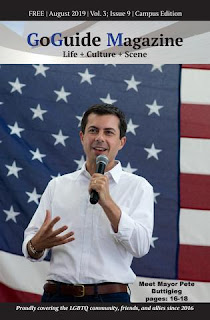 “Our questions are about the same for each candidate and they’re intended to be informative with no gotcha-type questions included,” Nedoba said. “The LGBTQ community, friends, and allies want to know where the candidates stand on the issues, not how GoGuide could somehow catch a candidate into making a poor statement or having to explain something that is of no interest to anyone at this time of the race.”

The response to Buttigieg on the August cover was hugely favorable. Nedoba reports it was “by far the most picked up [issue] in the history of the magazine.”
Nedoba is also critical of the way other media outlets have covered Buttigieg. “I don’t follow other local LGBTQ publications, but I do see national publications from time to time and I haven’t been impressed with their coverage. It’s been over the top. It has appeared to me the national LGBTQ media was trying to drive the agenda for Buttigieg rather than waiting for a position statement from the candidate himself.”
Nedoba said GoGuide will be publishing a pre-caucuses double issue with a street date of Dec. 1, 2019-Jan. 31, 2020.  “It will highlight in print and online the positives of each candidate.”
GoGuide will hold off on making an endorsement for now. “At this time I’m not willing to commit to an endorsement for the Iowa caucuses,” Nedoba added.
The interview series can be found at GoGuideMagazine.com.
IN THE NEWS
Volume 21
Issue 7