Skip to content
by Joe Siegel
(This is the second in a planned series of interviews with local media professionals who have covered candidates as they announce their presidential candidacy.)
The 2020 presidential campaign has an ever-expanding group of contenders vying for the Democratic nomination. United States Sens. Elizabeth Warren of Massachusetts, Kirsten Gillibrand of New York, Amy Klobuchar of Minnesota, Cory Booker of New Jersey, and Kamala Harris of California have launched their candidacies, along with former San Antonio, Tex., Mayor Julian Castro. Other candidates include former United States Rep. John Delaney of Maryland, Rep. Tulsi Gabbard of Hawaii, and Pete Buttigieg, the mayor of South Bend, Ind., and the first openly gay presidential candidate.
Which one will best serve the queer community as president?
Buttigieg, 37, is a graduate of Harvard University, a Rhodes scholar, and a veteran of the War in Afghanistan. 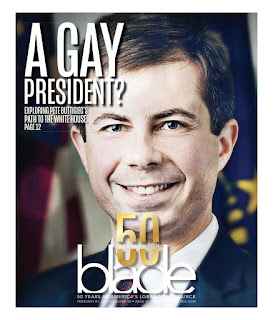 The Washington Blade put full-page photo of Buttigieg on its February 1, 2019, cover along with the

headline, “A Gay President?” The newspaper notes: “LGBT priorities for Buttigieg, who said he’d run a campaign based on the themes of freedom, democracy and security, include passage of the Equality Act and greater visibility for transgender people. Distinguishing himself from other 2020 hopefuls, Buttigieg said he supports transgender people having access to transition-related care, even when they’re in prison.”

Buttigieg calls the Trump administration’s positions on trans rights and its trans military ban “extremely disturbing.”
“When I was in the military, the people I served with could not have cared less whether I was going home to a girlfriend or boyfriend. They just wanted to know that I was going to be someone they could trust with their lives and vice versa,” Buttigieg told the Blade in a new interview.
On the other end of the spectrum, Gabbard, 37, has drawn criticism for her anti-LGBTQ positions in the past.
“As a state representative in the early 2000s, Gabbard advocated and legislated against the ‘homosexual extremists’ trying to ‘promote their agenda to our vulnerable youth,’” Out Magazine’s Harron Walker wrote. “Before entering the Hawaii state legislature in 2002, she worked for the Alliance for Traditional Marriage, an anti-marriage equality organization run by her dad.”
Gabbard now says her views have “changed significantly” since then. Walker noted: “Since her election to the House of Representatives in 2012, Gabbard has opposed the Defense of Marriage Act, spoke out against the President’s proposed trans military ban, and supported the Employment Non-Discrimination Act. The Representative is also a member of the House LGBT Equality Caucus, Politico notes, and her voting record on LGBTQ+ rights has a score of 100 out of 100 from the Human Rights Campaign.”
Booker, 49, is the first African-American senator from New Jersey and served as the mayor of Newark for eight years. Booker advocated for marriage rights for same-sex couples.
“Cory Booker has been extremely supportive of the LGBT community both as the mayor of Newark and throughout New Jersey since his run for the U.S. Senate,” said Peter Frycki, publisher of Out in Jersey magazine, based in the state capital of Trenton.
“He was one of the early supporters of same-sex marriage in New Jersey politics before the U.S. Supreme Court decision,” Frycki noted. “And he has always found a way to say the right thing when LGBT issues came to light in New Jersey politics.”
Earlier this month, GoGuide Magazine, based in Iowa City, published a one-on-one interview with businessman and Democratic presidential candidate Andrew Yang, 44. Although his poll numbers are, as GoGuide put it, “meager,” the magazine notes that Yang has attended or hosted almost 150 events in Iowa to date.
When asked, “Why should the LGBTQ community support you?” Yang responded, “Many folks in the LGBTQ community tell me I’m running on the most pro-LGBTQ presidential platform they’ve ever seen. My Iowa Campaign Coordinator dropped out of law school to work for me in part because he knows personally how transformative Universal Basic Income would be for the LGBTQ community. As he put it, the promise of “It Gets Better” is hollow without the promise of financial security in the case your family or community rejects you for who you are.” (The full interview is available at https://goguidemagazine.com/)
Another candidate with low name recognition, John Delaney, 55, was Maryland’s congressional representative for the sixth district for three terms. Delaney has supported same-sex marriage and voted for enforcement against anti-gay discrimination in public schools.

Delaney has received the score of 100 from the Human Rights Campaign for his support of equality-related legislation. He has been a member of the LGBT Equality Caucus since 2017.
However, Delaney has been attacked by some members of the LGBTQ media.
In an August 2017 editorial titled “We don’t need another rich businessman for president,” the Washington Blade criticized his candidacy: “There is nothing original on Delaney’s website. A few overused platitudes and then you get to read what turns out to be the principles of the 2016 Democratic Party platform. Statements like, ‘Our government is hamstrung by excessive partisanship. We are letting critical opportunities to improve the country pass us by. And we are not even talking about the most important thing: the future.’
“One reason our politics is a mess is candidates like Delaney who think it’s a game and you can buy a seat at the table or a nomination. He has been in the Congress a little over four years with no real accomplishments and is clearly bored,” the editorial noted.
Much of a candidate’s past can be mined from LGBTQ media coverage in their home state or city, much as Chicago’s Windy City Times made national headlines in 2009 when the newspaper reported out the complete answers then-state senate candidate Obama gave in 1996 to a questionnaire from Outlines newspaper (which merged with Windy City Times in 2000). That survey showed that Obama supported marriage equality, even though he supported only civil unions for same-sex couples in 2009. For more of our coverage of this year’s candidates, go to https://presspassq.blogspot.com/2019/01/presidential-candidates-have-record.html
(Editor Fred Kuhr contributed to this report.)
TOP STORY
Volume 20
Issue 11