Skip to content
Interview with Editor in Chief Joel Martens
by Joe Siegel
Geographic coverage area: The larger Southern California area with three separate magazines that speak to each of the following regions: San Diego County, Orange & Los Angeles Counties, and the Greater Palm Springs region
Year founded: 2007; currently the longest-serving LGBTQ publication in Southern California
Staff size and breakdown: (writers, editors): Publisher/OwnerJay Jones, Editor in Chief Joel Martens, Creative Director Cesar Reyes, Associate Publisher Brad Hart, Copy Editor Bill Biss, Intern Korie Houston
Key demographics: Readership consists of those living in, or visiting, the metropolitan areas of San Diego, Orange, Los Angeles and Riverside Counties; over 320 distribution points throughout the region, with a monthly readership that now exceeds 60,000 in print alone; online presence via website reaches an average 48,000 unique visitors per month, with 20 percent of that group paging through the full online version of the magazine as well (9,600 average per month); target market includes educated, affluent professionals between the ages of 21 to 65 (66 percent of readers are between 25-65 and 55 percent between 35 and 54)
Website: http://www.ragemonthly.com/
*****
PPQ: What feature or features of The Rage Monthly have been the most popular with readers?
Editor in Chief Joel Martens: That’s a hard thing to pin down over the course of 11 years. Our profiles of LGBTQ community movers and shakers in the SoCal region are always a popular read. After that, probably our high-profile interviews with people such as Adam Rippon, Meryl Streep,  Lea Delaria, Wanda Sykes, Dustin Lance Black, Lady Gaga, George Takei, Colin Firth, Amistead Maupin and Shirley MacLaine, to name just a few. 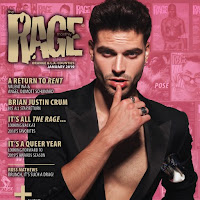 PPQ: Who came up with the name and what is the inspiration for it?
Martens: Jay Jones, the publisher, came up with the name:
R – Real
A – Art
G – Gay
E – Entertainment
PPQ: What challenge has The Rage Monthly had to overcome since its inception?
Martens: Keeping up with the changing demographics of our audience and how they acquire information. The advent of online media has radically changed how data is picked up and the length of attention readers have for said information. It’s interesting to note though that in recent years, there has definitely been a return in the popularity of print media. This is especially true for the arts and community stories we do.
PPQ: What challenge or challenges is The Rage Monthly facing now?
Martens: Along with the changes to how information is acquired came a change in how advertisers reach out to those who they wish to connect with. The push to internet/online advertising was and continues to be a challenge, but as with readership, we have definitely seen a return to the popularity of print advertising in recent years.
PPQ: What one change would you like to make?
Martens: We just introduced our third edition in Palm Springs; growing that market is our best and biggest goal for 2019. An ongoing, continuous goal is to always increase our reach, representing and giving voice to the entirety of the broader LGBTQ community.
PPQ: What has been the biggest news story or stories The Rage Monthly has covered?

PPQ: On the Kinsey Scale of 0-6 [exclusively straight to totally gay], how gay is your publication?
Martens: 6 – We are totally gay!
PPQ: Do you see yourselves as “activist journalists”? If so, in what way?
Martens: Absolutely. Giving voice to the LGBTQ community is our raison d’etre and our method is to do so by illustrating the community’s many successes. When you consider the massive challenges and great changes that have occurred over the course of the last 10 to 15 years: marriage equality, the defeat of Don’t Ask, Don’t Tell and the increased overall exposure the LGBTQ community has experienced socially, it’s pretty remarkable, especially in the face of the challenges being launched by the current administration.
PPQ: What’s the most surprising feedback you’ve received from a reader?
Martens: That we aren’t “gay” enough. My personal favorite is that our covers are too “sexy.” Admittedly, we show skin from the torso up, but we are very selective about how much is revealed.
PPQ: What advice would you give to anyone who may want to launch their own GLBT publication?
Martens: Be prepared to work hard! Reach out, build connections, know your market intimately and participate in it. Never take for granted how important integrity is. And fact check diligently.