Skip to content
by Joe Siegel
More than 75 percent of LGBTQ people say they tend to support companies that market to and support the LGBTQ community.
That’s just one tidbit from the 12th Annual LGBTQ Community Survey report, which was recently released by San Francisco-based market research firm Community Marketing and Insights (CMI). 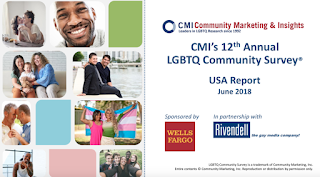 More than 40,000 respondents from LGBTQ communities in 151 countries participated in this year’s survey. More than 200 LGBTQ media outlets, events and organizations worldwide partnered with CMI, helping to gain wide representation of respondents.
David Paisley, senior research director for CMI, said he has noticed a shift in survey results given the current presidential administration.
“If we look at pre-Obama, it was really corporate America that drove LGBTQ equality in our government,” Paisley said. But now, there is now a lot of “apprehension” regarding what “the government and Supreme Court will do to LGBTQ rights in the coming years.”
Of the 18,000-plus LGBTQ survey respondents living in the United States, 76 percent fear there will be a roll back of recent equality gains in the coming year.
In the business realm, 85 percent agree that corporations that support LGBTQ equality are more important than ever, and 76 percent agree that companies that support LGBTQ equality will get more of their business this year.
There is also wide support for companies that support the transgender / gender-expansive community. Three quarters of respondents feel more positive towards companies that include transgender / gender-expansive community imagery in their outreach communications. However, only 6 percent think that corporations are currently doing a good job at outreaching to the transgender / gender-expansive community.
When asked if they live in an LGBT-friendly country, 5 percent of LGBTQ Americans strongly agreed that the United States was LGBT-friendly, 52 percent somewhat agreed, 43 percent somewhat or strongly disagreed.
This is in strong contrast to Canadians, where 62 percent strongly agreed they live in an LGBT-friendly country, 36 percent somewhat agreed, and only 2 percent somewhat or strongly disagreed.
The CMI team has been conducting LGBTQ consumer research for over 25 years. Their methodologies include online surveys, focus groups (in person and virtual), in-depth interviews and advisory boards across the United States and globally.
CMI will be hosting a webinar to not only review the survey results, but also interpret the data to help our clients reach their sales and outreach goals. The webinar, which will focus on United States respondents, will take place on Thursday, July 26, 2018, from 10am-11am Pacific Time. Go to https://register.gotowebinar.com/register/794545976477976833 to register for the free webinar.
Timed to the release of the report, CMI also debuted its new website at https://communitymarketinginc.com, better-organized to help those interested find this and other research reports on a variety of LGBTQ topics and issues for free download, as well info about our conferences and corporate training.
Go to http://research.communitymarketinginc.com/public/XBZj/zMz/subscribe to request a downloadable copy of CMI’s 12th Annual LGBTQ Community Survey report, available at no charge.
The survey was completed in partnership with Rivendell Media, which publishes Press Pass Q.
TOP STORY
Volume 20
Issue 4