Skip to content
by Joe Siegel
QLife, based in Las Vegas, has expanded its online editions to Ohio and Rhode Island, according to editor Russ White.
White said QLife launched its city editions in Las Vegas, Los Angeles, and New York last January. The first statewide edition of QLife launched in September and the Rhode Island edition launched November 1.
“In just two months, we’ve seen our Ohio readership increase 132 percent,” White wrote. “We expect to see our Rhode Island readership increase as much, if not more in the coming months.” 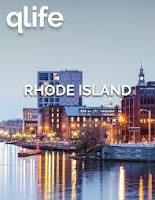 White said QLife was expanding its digital platform in cities where LGBT publications have folded.
“We expanded to Los Angeles and New York a year ago with the collapse of Frontiers [in Los Angeles] and Next [in New York City],” White explained. “We added Ohio in September with the shuddering of [Columbus-based] Outlook Ohio.”
In Rhode Island, longtime LGBT newsmagazine Options suspended publication last July. White noted there was a need in the state for an LGBT publication.
“We took a wait-and-see approach with Options, but with no activity there in months, we made the expansion,” White said. “We choose our expansions very deliberately and carefully. If there is an existing legacy publication, we are less likely to expand. That was the case with Florida. Even though Agenda collapsed, Florida has many other viable publications, so it wasn’t a good fit for us.”
Kyle McKendall, the executive director of Options, said it is yet to be determined when the magazine will resume, noting the board of directors does intend to “bring it back as soon as possible.”
“The board is working thoughtfully, and is outlining a plan to restructure the organization and explore ways to be financially stable,” McKendall said.
As for QLife, McKendall said White reached out to him last July with a proposal that QLife assume the publication role of Options. McKendall told White that the Options board of directors was examining ways to bring the magazine back.
“His decision to enter the Rhode Island market with QLife appears to be a direct attempt to capitalize on our organization during a vulnerable time,” McKendall added. “QLife is a for-profit organization and I question their motives with the recent announcement of a Rhode Island publication.”

McKendall believes Options will thrive despite the presence of QLife.
“I don’t think it’s accurate to say that QLife is a rival publication,” McKendall said. “I’m confident that our deep ties to the LGBTQ nonprofit community, commitment to and from readers, and history of serving the local community for 35 years, sets our organization apart from any for-profit operation.”
White said QLife plans further expansion to other regions of the country.
“As we choose where we expand, we take the competitive landscape into account,” White added. “Our priorities are the underserved communities that emerge when a print publication fails and communities that do not have existing publications. We’re also working on business models that allow entrepreneurs to license the QLife brand and infrastructure and start their own local affiliate.”
IN THE NEWS
Volume 19
Issue 8

Out & About Nashville staffers reflect on first 15 years