Skip to content
by Fred Kuhr
The Equality Forum, a national LGBT organization based in Philadelphia, is celebrating LGBT History Month, which takes place every October, by offering up an “Icon” for each day of the month with accompanying videos, photos and biographies free for download and use. 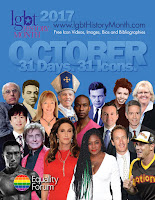 “LGBT History Month celebrates the achievements of 31 lesbian, gay, bisexual or transgender Icons,” according to a statement from the Equality Project, which assumed responsibility for providing content, promotion and resources for LGBT History Month in 2006. “Each day in October, a new LGBT Icon is featured with a video, bio, bibliography, downloadable images and other resources.”
Most of the Icons are people most casual readers have never heard of, such as Rodney Wilson, who will be honored on October 31. “In 1994, Wilson, a Missouri high school teacher, believed a month should be dedicated to the celebration and teaching of gay and lesbian history, and gathered other teachers and community leaders. They selected October because public schools are in session and existing traditions, such as Coming Out Day (October 11), occur that month,” according to his bio on the site.
Others, such as Caitlyn Jenner, who was honored on October 19, are more controversial.
Other Icons include pioneering San Francisco politician Tom Ammiano, former major league baseball player Billy Bean, and “A Raisin In The Sun” author Lorraine Hansberry.
To access the free content, go to https://lgbthistorymonth.com
IN THE NEWS
Volume 19
Issue 7