Skip to content
by Joe Siegel
The National LGBTQ Task Force, in collaboration with NLGJA – The Association of LGBTQ Journalists, and the National Association of Hispanic Journalists (NAHJ), launched a Spanish-language stylebook for journalists reporting on LGBT people.
Part of a process that began in 2005, “El Manual de Estilo Sobre la Comunidad Lesbiana, Gay, Bisexual y Transgénero” includes guidance as well as a glossary of terms to use and avoid when reporting on LGBT people. 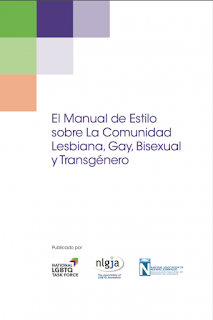 The joint publication is a result of ongoing efforts to educate journalists on LGBT cultural terminology, which includes workshops at the annual NLGJA National Convention, NAHJ’s Excellence in Journalism Conference, and the National LGBTQ Task Force’s Creating Change Conference. The 2017 NLGJA National Convention will take place in Philadelphia, September 7-10, and the 2017 Excellence in Journalism Conference is set for September 7-9 in Anaheim, Calif. The 30th annual Creating Change Conference will take place in Washington, D.C., on January 24-28, 2018.

“NLGJA’s mission is to foster fair and accurate coverage of LGBTQ issues and people, and we’re very excited to make that mission more inclusive and accessible through ‘El Manual de Estilo Sobre La Comunidad Lesbiana, Gay, Bisexual y Transgénero,’” said NLGJA Executive Director Adam Pawlus. “NLGJA is grateful for the cooperation and collaboration of NAHJ and the Task Force in bringing this new resource to life.”
Gricel M. Ocasio, publisher of Boston-based The Rainbow Times, which publishes some of its pages in Spanish, welcomed the stylebook.
“For a long time, Spanish LGBTQ media and those, like us at The Rainbow Times, have published Spanish pages for the LGBTQ community without any given or established set of guidelines,” Ocasio said. “For me as a journalist and publisher, this resource will be like my AP Stylebook — another publication I keep handy at all times when writing for and training Spanish reporters and columnists for The Rainbow Times.”
Ocasio believes the stylebook will end up having a positive effect on her paper’s coverage.
“The Spanish-language Stylebook was definitely needed and I know it will ultimately, through that domino effect, enhance the lives of many LGBTQ Latino people in the United States and abroad,” Ocasio said. “I’d like to congratulate [NLGJA and NAHJ] for having published this guide. The repercussions of such an action will be felt throughout the Latino/Hispanic community for years to come.”
To download “El Manual de Estilo Sobre la Comunidad Lesbiana, Gay, Bisexual y Transgénero,” go to http://www.thetaskforce.org/el-manual-de-estilo-sobre-la-comunidad-lesbiana-gay-bisexual-y-transgenero/
IN THE NEWS
Volume 19
Issue 1

New edition of AP Stylebook to include gender-neutral pronoun