Skip to content
Interview with Editor in Chief Stanford Altamirano and Managing Editor Mark Ariel
by Joe Siegel
Geographic coverage area: Southern California
Year founded: 2011
Staff size and breakdown: 16 people, including one editor in chief, one managing editor, one designer, one office manager, four sales executives, six writers, and two photographers
Physical dimensions of publication: 8.5” x 11”
Average page count: 60
Key demographics: 79% male, 21% female, median age 38
Print run: 25,000 (30,000 every June for L.A. Pride)
Web site: thefightmag.com
*****
PPQ: What feature or features of The Fight have been the most popular with readers?
Editor in Chief Stanford Altamirano: Our monthly section on recovery called The Share is quite popular, as well as our annual Leather Pride issue. Among the features that have received a lot of feedback was an article written by a straight woman who fell in love with a trans man, and an interview by Kit Williamson with the actor Van Hansis, who officially came out during the interview (http://perezhilton.com/tag/van_hansis/).
PPQ: Who came up with the name and what is the inspiration for it?

Managing Editor Mark Ariel: Editor in chief Stanford Altamirano came up with the name The Fight, as in the fight for equality.

PPQ: What challenge has your publication had to overcome since its inception? 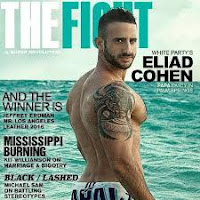 Altamirano: In 2011, advertisers were just beginning to realize that niche market print should still be a component of their advertising budget. It was rough at first. But as time went by, advertisers who initially told us, “We only do social media,” came back to us with the realization that certain types of print media need to be included in the mix.

PPQ: What challenge or challenges is The Fight facing now?
Ariel: The Fight sponsors a multitude of LGBTQ related events throughout the year, including all SoCal LGBTQ Pride festivals, L.A. Leather Week Pride, Palm Springs Leather Pride, White Party, and Trans Pride. The challenge is balancing out our time between these community events and continually putting out a quality product.

PPQ: How has The Fight changed since it was first launched?

Ariel: We have become much more community focused and driven, with an emphasis on those in the community who we feel have been under-represented in local gay media and gay media in general, such as people of color, the trans community, and the recovery community.
PPQ: What one change would you like to make?

Altamirano: We feel we are on the correct path. We would not change anything at the moment.

PPQ: What has been the biggest news story or stories The Fight has covered?
Altamirano: Aside from the obvious — like the Supreme Court’s marriage equality decision — the PrEP HIV prevention revolution has been continually covered in The Fight, from new forms of PrEP in the works to AIDS Healthcare Foundation’s negative stance on PrEP. The Los Angeles County HIV Commission recently publicly recognized The Fight for its reporting on new HIV cure attempts and treatment.
PPQ: What’s the most surprising feedback you’ve received from a reader?

Ariel: The most touching feedback was from a young trans man who came out to his family after reading our cover story on Buck Angel in our Pride issue two years ago. He wrote that he wouldn’t have had the courage to come out as trans if he hadn’t read that interview.

PPQ: What advice would you give to anyone who may want to launch their own GLBT publication?

Altamirano: Have a clear mission statement. In other words, have a core purpose and focus.

(What’s happening at your publication? Let us know. Email editor Fred Kuhr at editor@presspassq.com) THE BLADE FOUNDATION announced the hiring of two spring/summer fellows, who will spend 12 weeks reporting on LGBTQ issues while being mentored by Blade editors. CARIS WHITE, a junior […]

by Joe Siegel After two years of virtual Pride celebrations due to the ongoing COVID-19 pandemic, many cities around the country are once again holding in-person festivities. LGBTQ media outlets are doing their part to promote the return of in-person Pride. Angela […]

by Joe Siegel Past and present writers and editors of San Francisco’s Bay Area Reporter (BAR) gathered for a series of online forums to celebrate the publication on its 50th anniversary. The 12th and final instalment of the forums, called BAR Talks, […]

by Randy Stern(Randy Stern is the new managing editor of Lavender Magazine, based in Edina, Minn. The following column ran in the magazine’s March 10, 2022, issue and appears below with permission.) It is my great honor to introduce myself as the […]


I'm nurisahi from Los Angeles, I am grateful to Dr. jatto who help me to help put an end to my HIV positive [+ ve] illness. I saw a blog on the Internet on how this Powerful Healer healed someone. As a patient who know this will take my life one day, and I have to live with other relatives and friends as well. So I copied Dr. sado, the traditional healer email id: drjattosolutionhome@gmail.com and contacted him. I would say that he is God sent to me. last week I went to close by the hospital to check my HIV status, it was surprising that the lab technician said the test result was HIV negative [-ve]. You can contact him. Telephone number or whatsapp +2348145243120
my advice is to contact him and tell him about all your health problems. thank you very much Dr.sado
NOTE THAT THIS GREAT MAN CAN CURE ANY TYPES OF SICKNESS OKAY
(1) HERPES
(2) HIV
(3) ALS
(4) PENIS ENLARGEMENT
(5) LOW SPERM COUNT
(6) PREGNANCY
(7) CANCER
(8) DIABETIES
(9) Zika virus