Not long after moving to Tennessee, it struck a gay newspaperman: No magazine served the gay market in Nashville. “There were two newspapers, and they served a purpose,” Joey Amato told Press Pass Q. “But there was nothing fancy, glossy and upscale.”
And so Amato changed the region’s media landscape in March 2013 by launching UNITE Nashville, a bimonthly lifestyle magazine.
One of the local newspapers folded recently, and another Tennessee-based bar-guide also ceased publication several months ago, leaving UNITE Nashville as the only upscale LGBT magazine in the state.
Amato billed the new Nashville publication as “the first of its kind in Tennessee, catering to the affluent LGBT business community while at the same time incorporating a variety edgy lifestyle content, which appeals to the market.”
As its name suggests, UNITE is all about bringing together the “affluent and professional community in Tennessee,” with a lens on “business, lifestyle, entertainment, travel, dining and health,” according to the publication’s media kit.
Published every other month, UNITE’s 3,000 to 5,000 copies are distributed in restaurants, coffeehouses, retail establishments, offices and nightlife venues. To mark its one-year anniversary, the magazine’s distribution expanded to Knoxville while Amato, who serves as publisher and editor in chief, is still weighing further expansion to Memphis and Chattanooga. 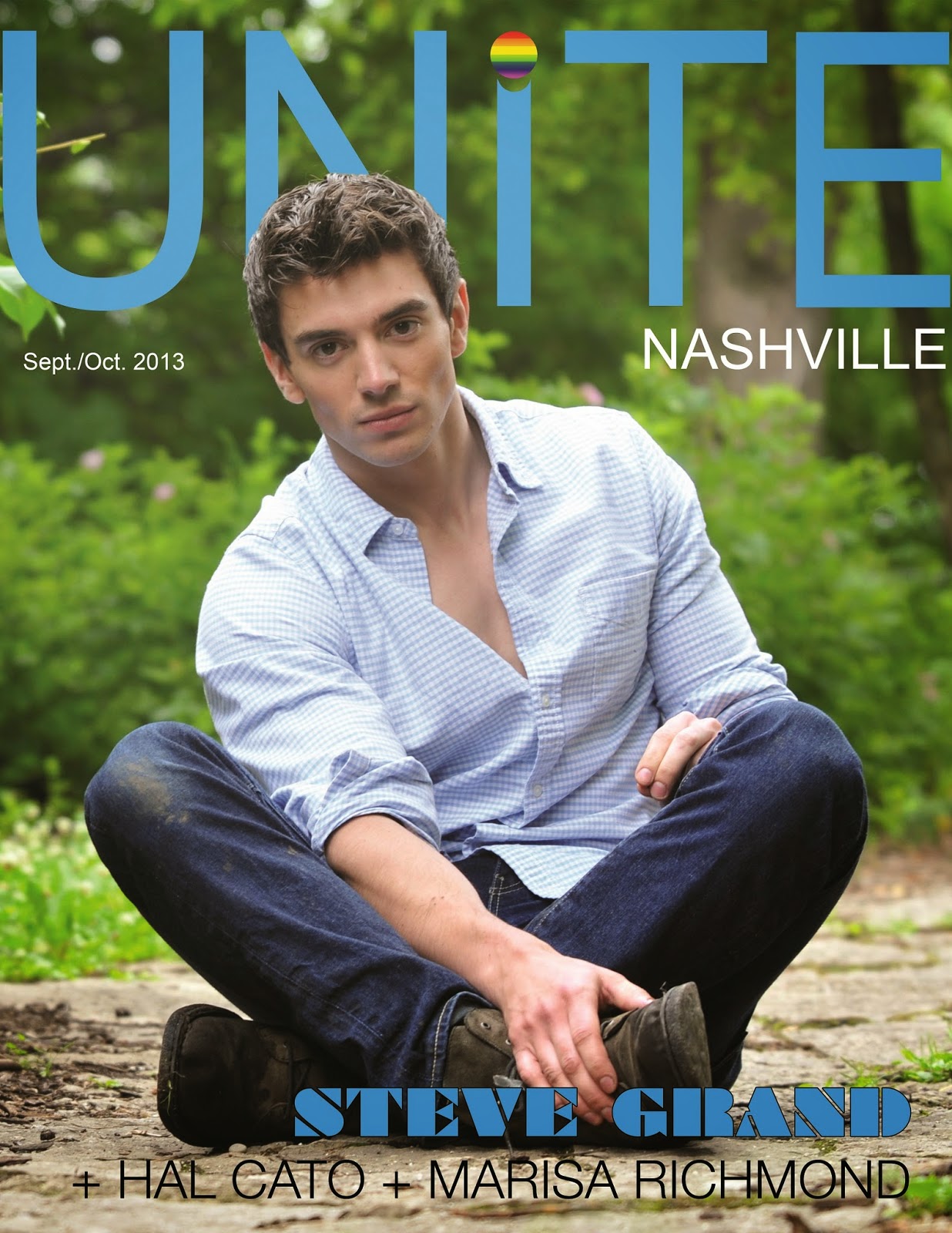 UNITE Nashville’s content is “fresh, edgy, and ambitious,” combining a hybrid of “entertaining and informative content for the educated reader, and one who is also interested in nightlife, culture, music, art, fashion, travel, health and more,” according to the publication’s media kit.
Initially, each issue was 48 pages of full-color glossy, printed on 8½” x 11” paper, but grew to 64 pages within a year. Superstars including Pink, Carrie Underwood, Rod Stewart and Iron Chef Cat Cora have graced UNITE’s cover.
But launching UNITE Nashville is not the only way Amato has changed the LGBT media landscape. This past December, he launched UNITE Business, a bimonthly publication catering to LGBT business owners and corporate allies.
Again, Amato saw a need and decided to fill it. “There was no publication out there for the business community,” he said. “People have been emailing me once a day just saying how much the love the publication. So after that feedback, I said, ‘Okay, we are onto something.’”
The 2,000 copies of UNITE Business are mailed nationwide directly to LGBT chambers of commerce and business owners, which he said makes costs for shipping higher. “It’s not a huge quantity, but at least an advertiser knows exactly who is reading the publication.” 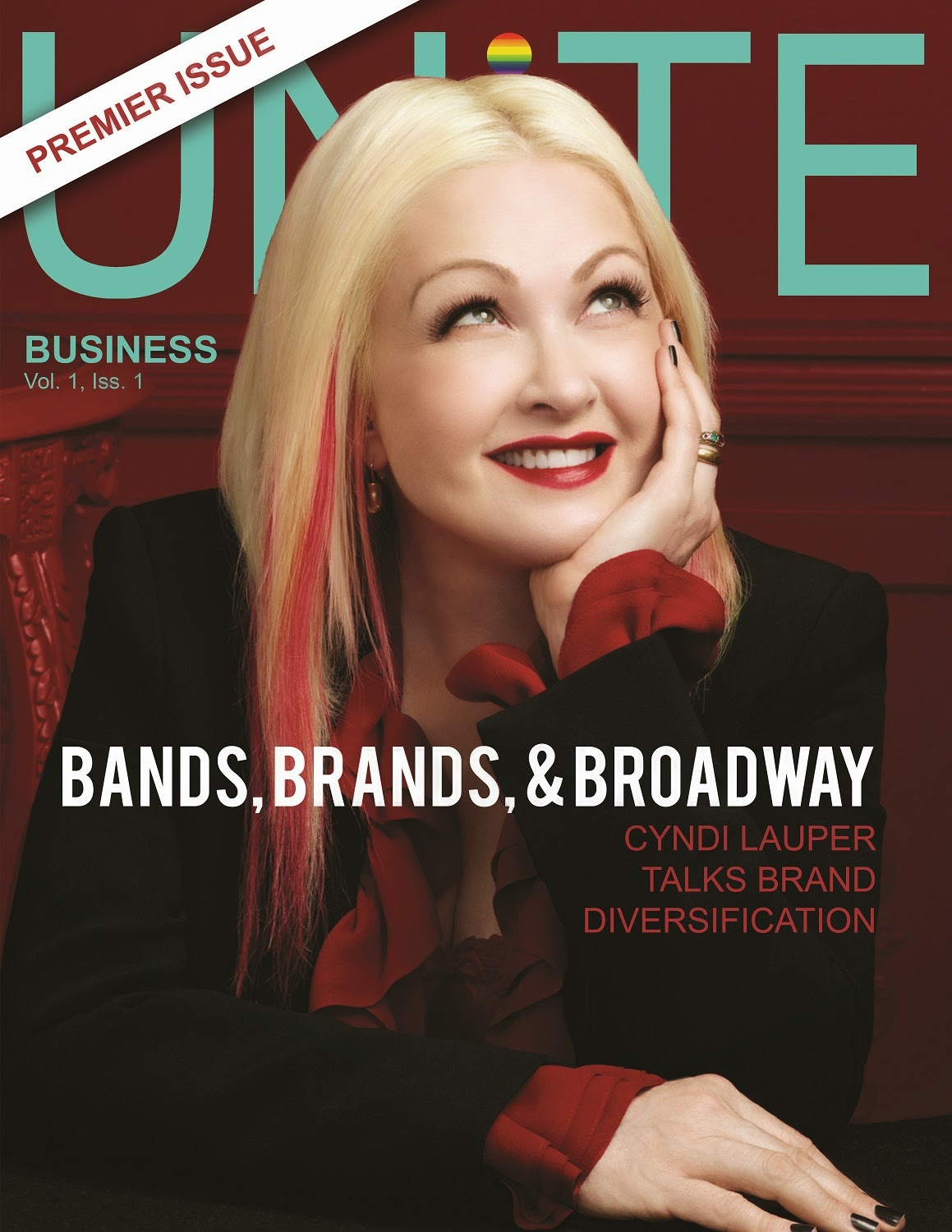 LGBT chambers of commerce distributing UNITE Business include Wisconsin, Dallas, Miami, Washington, D.C., Long Beach, Las Vegas and Seattle, in addition to the National Gay and Lesbian Chamber of Commerce in Washington, D.C. “Not every LGBT chamber of commerce yet, but we’re getting there.”
Amato timed the official launch of UNITE Business’ premier issue during Community Marketing Inc.’s annual Tourism and Hospitality Conference, held this past December in Fort Lauderdale. The gathering brings together travel industry, hospitality and other professionals.
Amato hopes UNITE Business’ alliance with the National Gay and Lesbian Chamber of Commerce and the International Gay and Lesbian Travel Association will help raise the publication’s visibility.
Both print versions of UNITE Nashville and UNITE Business are now available throughsubscription on their website at a cost of $24/year.
UNITE Business’ inaugural issue (http://issuu.com/unitemagazine/docs/biz_web) featured pop musician Cyndi Lauper and the British business magnate and investor Sir Richard Branson, perhaps best known as founder of the Virgin group.
The most recent issue (http://issuu.com/unitemagazine/docs/unite_biz_feb-mar) spotlights Bob Witeck — president and founder of Witeck Communications, a strategic public relations and marketing communications firm based in Washington, D. C. — as a pioneer in LGBT marketing.
Altogether, editorial content of UNITE Business varies from company profiles to business advice columns (tax and financial tips) to lifestyle content such as how to when stressed out at work.
The publication also likes to “feature companies and not just corporations,” said Amato. 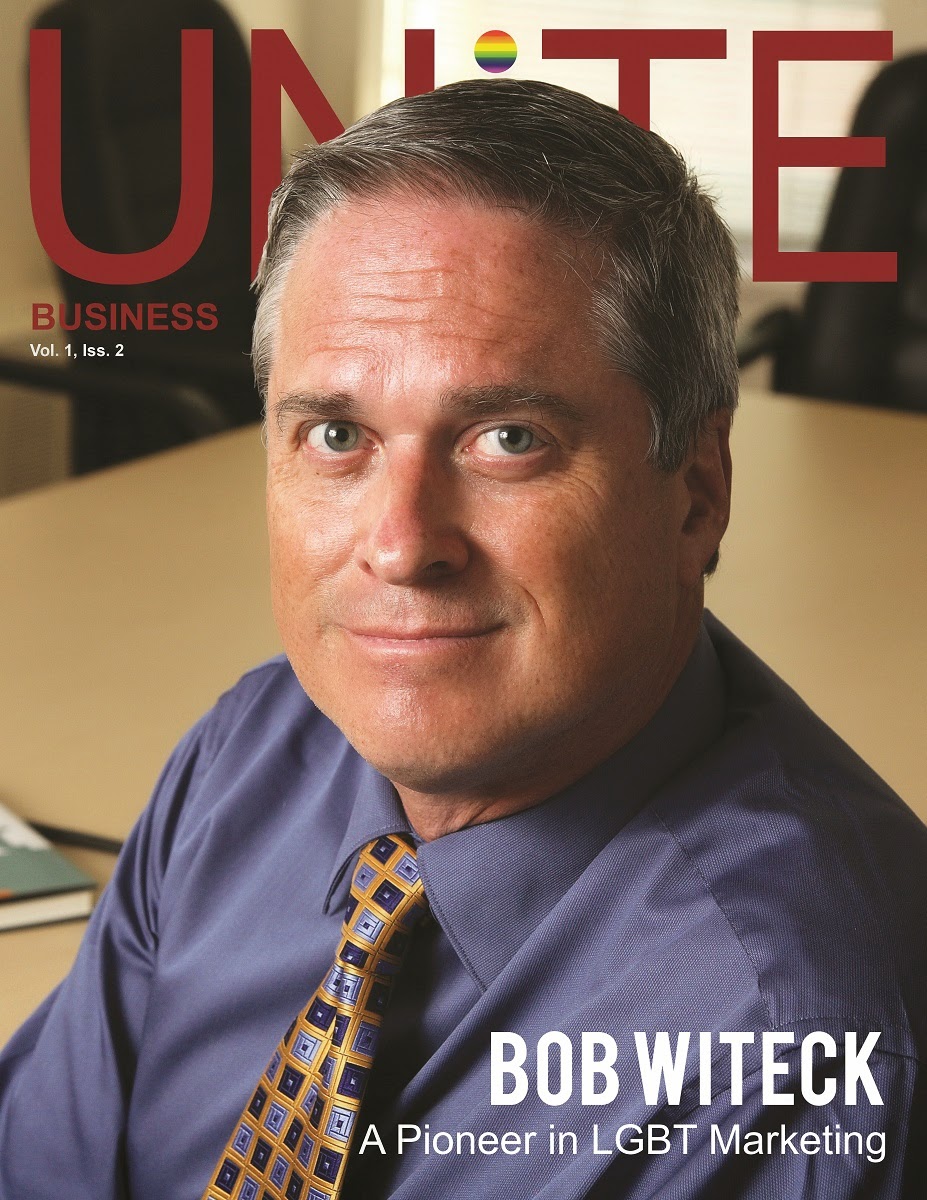 The February/March issue ran a story on Nashville-based Nissan, which focused on the car company’s rapid progress in workplace diversity and inclusion of LGBTs. The April/May issue will spotlight both United Airlines and Darden Restaurants LGBT initiatives.
And yet, “UNITE Business is more for the mom and pops, which is why advertising rates are not out of reach for small businesses,” he said. Small business rates start at only $200, making the publication affordable for almost any business.
UNITE Business is “more of a Fast Company, entrepreneur-style publication,” said Amato.
A native New Yorker, Amato, who holds an MBA degree from Rollins College, located in Winter Park, Fla., is no stranger to LGBT publishing. He served as the first managing editor of South Florida Gay News and then OMG! Magazine.
In expanding the UNITE brand, Amato has joined forces with Echelon Magazine, a leader in LGBT business information. Through the two publications’ collaborative efforts, Amato and Echelon Magazine editor in chief Michael Lamb hope to create “a dynamic connection with the LGBT business community and promote the economic prosperity of this important economic niche,” according to a Dec. 6 news story published in Echelon Magazine.
IN THE NEWS
Volume 15
Issue 12


Great post . It takes me almost half an hour to read the whole post. Definitely this one of the informative and useful post to me. Thanks for the share.Miami Moving Company Forward Van Lines is a family owned moving company providing local, residential, commercial, industrial moving service in Ft Lauderdale & Miami, FL and the surrounding areas.

Q-Notes of N.C. changes mission to take on social justice