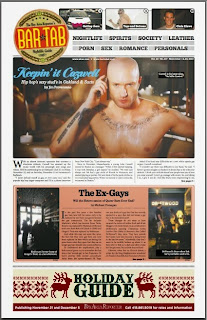 BARtab is one of BAR’s three sections. The other two are news and arts and culture.

For a short time, BARtab was a stand-alone monthly glossy, said editor Jim Provenzano during a recent telephone interview. “But this little glossy was too expensive,” he said.
Accordingly, “After giving it a good try,” added BAR publisher Michael Yamashita over the telephone, “we decided to fold it back into the paper as a stand-alone publication.”
With that move, BARtab, which premiered in May 2010 as a monthly glossy, switched to a newsprint-third section, on Sept. 26, 2013, for the Folsom Street Fair issue.
Also, with a publication run at the beginning of each month, calendar listings that far out became problematic. “Many people don’t know what they are doing three weeks out, let alone a month,” Provenzano explained.
“Trying to predict what would happen three weeks out,” said Yamashita, in “trying to corral all the press releases, was very difficult. It was comprehensive but not as we would have liked it. So we thought we could get that edge back in a weekly section, but also by separating more of the nightlife from arts and culture” where ads and content “would be more general entertainment” such as “film, theatre and books.”
Separating out arts and culture from nightlife in BARtab gave both sections a “clearer identity,” he said. “This is really about meeting the needs of some of our advertisers with policies that do not allow them to place ad content next to or in adult-content sections,” Yamashita added.
“Part of our struggle is that we don’t want to say ‘no’ to adult content,” he explained. “In the gay and lesbian community that’s part of our identity, and we are not about to start denying that. So we make no apology for having adult content. But at the same time, we want to work with everyone. A lot of Fortune 500 companies and others get squeamish about being next to adult-content oriented ads, so there was always a hesitation on their part and would disqualify us getting ad buys.”
BARtab’s editorial content focuses on the clubs and cabaret scene, which often includes drag-queen performances and go-go dancers. Reviews of current porn films are included. And the “On the Tab” section of BARtab features an expansive weekly calendar listing.
Additionally, “BARtab has covered the closing of gay bars, as well as the openings, and run pieces on the cultural shifts in the Bay Area,” said Provenzano.
BARtab’s new regular columnists include Scott Brogan, who covers the leather and kink scene. John F. Karr continues his saucy reviews of adult films with a peppering of social commentary. Social butterfly and Imperial Court royalty Donna Sachet’s biweekly “On the Town” column covers galas, benefits and festive LGBT community events. Jim Stewart serves as the section’s monthly BARchive columnist, providing never-published rare photos and stories of the 1970s gay bar scene. Other BARchive columnists have included author/editor Dr. Jack Fritscher and comic Marga Gomez.
All of which is to say BARtab is not so much bucking an assimilationist culture of techies and hipsters in San Francisco. Rather, BARtab’s editor sees a merging of cultures. “I’m not fine with that,” said Provenzano, referring to any number of gay establishments going straight, at the same time he laments the closing of gay bookstores and other LGBT establishments in gay enclaves of the city.
“But I still want to go to a show where drag queens and leathermen can hang out and people can be affectionate and not feel threatened,” he added. “So promoting that and getting paid to do it is great.”
In addition to editing BARtab, Provenzano serves as assistant arts editor at BAR. He was the publication’s freelance sports columnist for 10 years. He is also the author of four novels, including the Lambda Literary Award winner “Every Time I Think of You.”
IN THE NEWS
Volume 15
Issue 9