by Chuck Colbert
Like many Illinoisans, the publisher of Chicago-based Windy City Times closely followed lawmakers’ deliberations in the state capital of Springfield. But when legislators failed to take a vote May 31 on a same-sex marriage bill, Tracy Baim had enough. In a hard-hitting editorial, she took on the lead sponsor of the Religious Freedom and Marriage Fairness Act, taking him to task for not calling a vote. She went further, asking him to step aside as lead sponsor, and if the bill did not prevail in a fall legislative session, not to run for re-election.
“The biggest blame has to be placed on the chief sponsor of the marriage equality bill in the Illinois House, Rep. Greg Harris, an openly gay man,” Baim wrote in early June when marriage equality was not yet reality in the Land of Lincoln.
“His arrogance and close-to-the-vest approach on an issue that impacts hundreds of thousands of people in the state is unconscionable — and unparalleled in our community’s history,” she added. “To be clear, this is not a call for Harris to resign (despite what many on social media and in the mainstream media have interpreted this editorial to say), but he will have lost the trust of the people he made commitments to, and it is very difficult to lead once that trust is gone.”
Baim was, by her own acknowledgment, pretty “harsh,” dishing out plenty of criticism all across the board, noting areas for improvement for just about everybody — lawmakers, public relations firms, organizational leaders and grassroots community organizers.
Still, she and Harris agreed not to make the short-term failure personal.  They issued a joint statement and urged unity in moving forward.
And yet Baim, also an author and film producer, was not satisfied to leave marriage equality to political insiders or professional strategists, locally that would be the group Illinois United for Marriage and its coalition partners.
A veteran journalist and three-decade media presence in Chicago and beyond, she had an idea — a march on the state capital just as lawmakers would take up the marriage bill again. Outside pressure, Baim was convinced, combined with an inside game plan might do the trick.
Baim had more than the idea. She played a leading role in making the March on Springfield — the first ever LGBT show of outside force at the state capital — a success.
In all, she recruited 13 co-chairs to field an impressive array of racial, ethnic and geographic diversity.
The effort was “bipartisan enough” and “all-volunteer,” she said. “All local LGBT media were asked to partner, and no one got paid.” 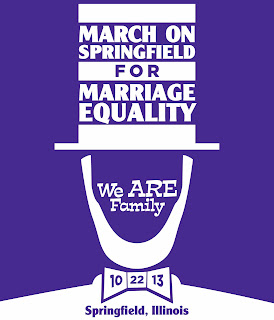