Skip to content
by Fred Kuhr
LGBTQ publications from around the country are taking part in a national celebration of the 50th anniversary of the Stonewall Riots.
“Rise Up: Stonewall and the LGBTQ Rights Movement,” an exhibit that will explore the modern gay rights movement in the United States, opened at the Newseum in Washington, D.C., will be on display through the end of 2019.
According to the Newseum, “Rise Up” explores what happened at the Stonewall Inn and how it gave rise to a 50-year fight for civil rights for LGBTQ Americans. The exhibit will include a yearlong program series featuring journalists, authors, politicians and other newsmakers who have led the fight for equality. 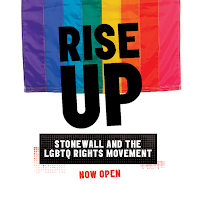 As part of the exhibit’s Today’s Front Pages display, front pages from different LGBTQ newspapers are featured, including the Washington Blade, Boston’s Bay Windows, Philadelphia Gay News, Dallas Voice, San Francisco Bay Times, Seattle Gay News, Watermark of Orlando, and QNotes of Charlotte, N.C.
The Newseum is known for its ongoing Today’s Front Pages exhibit, bring together front pages from newspapers across the country and beyond. In conjunction with “Rise Up,” the display is focusing on LGBTQ newspapers.
Frank Mitchell, the Newseum’s graphics specialist and exhibit designer, said, “On an average day, the Today’s Front Pages display is the result of the efforts of people at more than 800 newspapers from around the world,” as quoted in Bay Windows. “All those people — from more than 80 countries on nearly every continent — took time out of their busy schedules to contribute to a project that they feel is worthwhile.”
Mitchell noted that the newspapers have no formal contracts with the Newseum, but “on big news days, more than 75,000 unique visitors come to the Today’s Front Pages website to see how newspapers around the world cover major stories, as well as news of local interest.”
Jeff Coakley, co-publisher of Bay Windows added, “The fact that Bay Windows would appear in a museum on Pennsylvania Avenue in the shadow of the United States Capitol Building was something this newspaper’s founders could have never imagined would occur 35 years ago.”
For its featured cover, the San Francisco Bay Times commissioned artist, activist and local politician Debra Walker to create a cover that specifically commemorates Stonewall’s 50th anniversary.
According to the Newseum, “Rise Up” will explore — through artifacts, images and historic print publications — key moments in LGBTQ rights history, including the 1978 assassination of Harvey Milk, the AIDS crisis, former Congressman Barney Frank’s public coming out in 1987, the efforts for hate crime legislation, the implementation and later repeal of “Don’t ask, don’t tell,” and the fight for marriage equality. “Rise Up” will also look at popular culture’s role in influencing attitudes about the LGBTQ community through film, television and music, and explore how the gay rights movement harnessed the power of public protest and demonstration to change laws and shatter stereotypes.
For more information, go to http://www.newseum.org/todaysfrontpages/
TOP STORY
Volume 21
Issue 1