Skip to content
by Joe Siegel
The Fight magazine, based in Los Angeles, launched a San Francisco edition in April. Editor Stanford Altamirano said the expansion to one of the most competitive media markets in the country seemed natural. 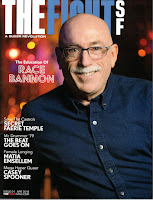 “The Fight sponsors the Folsom Street Fair. We produce the official guide for the event. Working with that market last year, we realized there is room for a glossy monthly publication focusing on culture, lifestyle and politics,” Altamirano said.
Readers can access both publications on The Fight’s web site, thefightmag.com. However, the magazines have different content. The San Francisco edition’s editorial staff are all based in the city, according to Altamirano.
The April issue featured Bay Area Reporter columnist and leather titleholder Race Bannon discussing “the evolution of kink, the golden age of gay sexual liberation, and San Francisco as the beacon of light in the LGBT world.”
The May issue features mayoral candidate Mark Leno. Leno is the first gay man elected to the California senate and would be the first openly LGBT mayor in the city’s history.
IN THE NEWS
Volume 20
Issue 2