Skip to content
by Joe Siegel
The Advocate, the longest running LGBT publication in the country, is celebrating its 50th anniversary this year. The latest issue, number 1091, features covers representing five decades of LGBT history, including the battle for trans rights, the fight for marriage equality, and the work of AIDS activists.
The magazine has managed to endure despite its share of setbacks and troubles through the years.
The Advocate started its life as the newsletter of Personal Rights in Defense and Education (PRIDE), a gay liberation group formed after police raided the Black Cat bar in Los Angeles. 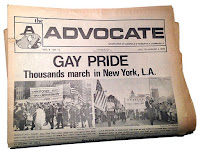 In the summer of 1967, Richard Mitch (aka Dick Michaels) — a writer for a chemical industry — his partner Bill Rau, and Sam Winston decided to turn the newsletter into a gay newspaper. Known as the Los Angeles Advocate, it debuted in September 1967 with a print run of 500 copies, produced at night in a print shop in the basement of ABC Studios.

In an effort to make the paper more professional, Mitch hired Rob Cole, formerly of the Dallas Times Herald, as news editor. As gay men and lesbians from across the country began to look to the paper for information, Mitch renamed it The Advocate in 1969, and it became the first American gay news publication with a nationwide distribution.
After marketing research suggested the LGBT community had more disposable income than most Americans, The Advocate’s advertising revenues rose, rescuing it from the brink of financial ruin.
The Advocate was the only LGBT media outlet to feature interviews with prominent gay and straight politicians, including Barney Frank, Al Gore, Steve Gunderson, John Kerry, and Hillary and Bill Clinton.
Once closeted celebrities were also featured over the years: George Michael, k.d. lang, Bishop Gene Robinson, Martina Navratilova, Chad Allen, Melissa Etheridge, Ellen DeGeneres, and Greg Louganis.
In 1996, the magazine hired its first female editor in chief, Judy Wieder.
The Advocate featured explorations of timely issues including hate crimes, monogamy, sex addiction, bisexuality, gays in sports, gays in the Mormon Church, and the LGBT people affected by the 9/11 terrorist attacks.
These stories “were written by seasoned journalists from a gay perspective that simply couldn’t be duplicated — even when, in the late ‘90s, some of these subjects and celebrities became big-ticket sellers for mainstream media,” Wieder wrote in a 2010 Huffington Post column. “With its harsh features and photos that no advertiser wanted to be anywhere near, the magazine depended on dedicated readers that renewed their costly ($40-plus) subscriptions year after year. For them to do this, the content had to be astonishing. It was unimaginably difficult for a small staff to keep it up every two weeks, but somehow it happened.”
In 2000, The Advocate’s parent company, Liberation Publications Inc. (LPI) — which had previously acquired book publisher Alyson Publications — purchased rival magazine Out, as well as HIV Plus. LPI and web company PlanetOut announced plans to merge, prompting critics to warn of an impending LGBT media monopoly. That merger was called off, but in 2005 PlanetOut purchased LPI for $31 million.

Even as PlanetOut faced a financial crisis in early 2007, The Advocate continued to gain new subscribers. To celebrate its 40th anniversary, it came out of the closet, doing away with the “privacy wrap” that had previously covered the magazine.

“The Advocate’s decision might seem like a trivial matter, … but it stands for something far greater — the increasing acceptance and visibility of gay people in public life,” wrote gay journalist James Kirchick. 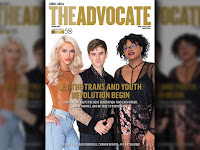 The Advocate has drawn plenty of criticism over the years. Many lamented its shift away from militant politics and its increasing emphasis on entertainment and lifestyle content, while others thought the magazine was too commercial and geared to affluent white gay men.

Diane Anderson-Minshall, the magazine’s current editorial director, noted that The Advocate “has become a voice for the voiceless.”
“For every [attorney] Robbie Kaplan and Edie Windsor [whom Kaplan represented in the U.S. Supreme Court’s marriage equality case], there were literally thousands of couples — and millions of other allies — who helped make marriage equality the law of the land,” Anderson-Minshall said. “Our battles are never begun by us; they are begun on the backs of those who came before us, and they will continue as we pass the torch to the next generation.”
IN THE NEWS
Volume 19
Issue 3

(What’s happening at your publication? Let us know. Email editor Fred Kuhr at editor@presspassq.com) CHICAGO READER, the alternative weekly led by WINDY CITY TIMES co-founder TRACY BAIM, celebrated its 50th anniversary on October 1, 2021. The anniversary will be marked with a number […]

by Joe Siegel The United States Census Bureau reported in its August 11 Household Pulse Survey that LGBTQ households have been more severely impacted by the COVID-19 pandemic. According to an August 16 story by Matthew Bajko in the Bay Area Reporter […]

by Joe Siegel  Seattle Gay News recently simplified its name, changing to just the initials SGN. Its logo was also updated. Publisher Angela Cragin explained that one of the reasons for the switch was to reflect changes in the LGBTQ community. “From […]

by Fred Kuhr A Freedom of Information Act (FOIA) lawsuit brought by the Washington Blade has led to the release of emails showing Trump Administration officials confused over the former president’s religious freedom directive. The FOIA lawsuit was filed in September 2020 […]

by Fred Kuhr The United States isn’t the only country where COVID has had a significant impact on LGBTQ media. The Gay Times, which has published in the United Kingdom in some form for nearly 50 years, has decided to end its […]

by Leo Cusimano(Leo Cusimano is the publisher of Dallas Voice. This “Letter from the Publisher” appeared in the May 7, 2021, issue of the newspaper and appears here with permission.) Dallas Voice was founded in 1984 as a community newspaper. In the […]


Experts and patriots are enraged:

The crazies secretly maneuvered more wealth into their pockets

In the last year, than they did in the last 185 years!

No living soul can spend that much money in a lifetime…

And when people sits on money,

And that’s how it all begins:

What’s coming in the next 6 months or less

Will give a new definition to the infamous “economic crisis”

Are you prepared to be broke…

Or can you turn the game around:

Use of word “queer” growing in LGBT news reporting