Skip to content
by Chuck Colbert
Mark Segal wears many hats. He is an activist, founder and publisher of Philadelphia Gay News (PGN), civic leader, political operative, and national LGBT leader.  Segal is also often referred to as the dean of American gay journalism. Now, with the publication of his memoir, “And Then I Danced: Traveling the Road to LGBT Equality,” he dons the hat of author.
By several measures, the book is a hit. Reviews have been positive. Within one month of its publication and after several readings in Philadelphia, New York City, and Washington, D.C., the publisher has ordered a second printing. “And I Then Danced” is now a number-one LGBT bestseller. The book is also being promoted in some unusual ways — on billboards and taxicabs. 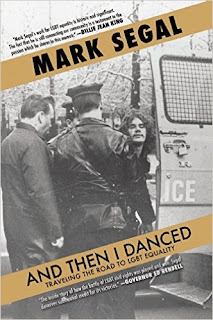 In 302 pages, Segal’s memoir traces his humble beginnings, growing up in a South Philadelphia housing project to his high point of dancing with his husband at the White House. Along the way, readers are treated with decades of gay history and LGBT liberation.
A Philadelphia Inquirer story put it this way: “In his memoir, without him saying it — maybe not even realizing it — gay icon Mark Segal is transformed from a long-haired ‘left-wing pinko fag’” social outcast into a bald, suit-wearing, political-power insider. A national LGBT leader, the South Philly-born Segal was at the 1969 Stonewall riots in Greenwich Village, the Bunker Hill of gaydom.”
During a recent telephone interview, Segal said, “I wrote the book because for years people have been telling me history is part and parcel of our struggle, and it needs to be recorded. I was so busy going from project to project, I never had time to look back. It took a non-gay friend (Comcast executive vice president and chief diversity officer David L. Cohen) to make the point to me how important [the history] was, and why I needed to write the book.”
One of the ways Segal made his historical mark was by interrupting media personnel on the air to raise LGBT visibility.
Perhaps the most famous “zap” targeted Walter Cronkite, when Segal invaded his CBS News studio and flashed a sign — “Gays Protest CBS Prejudice” — on his evening broadcast. As Segal wrote in his memoir, “As millions watched [on Dec. 11, 1973], I sat on his desk and held the sign right into the camera lens so that everyone could see the words.”
During the phone interview, Segal said that he had no goals once he set out to write his memoirs. “The book changed in many ways from the beginning. I wrote it with flashbacks to start out each chapter. The biggest change came when editor Michael Dennehy helped me craft the 15 chapters into the book’s final form. What surprised me was how many things I was involved in. My first reaction was that no one is going to believe one person did all of this.”
Segal said the two touchstones people ask about are “Stonewall and Cronkite.”
“The other thing readers like is my interaction with the president. I was surprised by how much interaction there had been,” he said. “Readers are also touched by the personal stories, which really surprised me.”
Of course, in “And Then I Danced,” Segal recounts the history of PGN, from its humble beginnings to a 2014 awards dinner where the newspaper received a national award for its investigative series on the murder of a local transgender woman.
He writes in his book, “By late 1975, we were laying out the first edition of the paper, which was to be issued in January 1976.  Never did I expect the battles that would follow over journalism.  Our vending boxes would be bombed, and we would clean them out, repaint them, and put them back. People would run over them with their cars, and we would, again, clean them up, repaint them, and put them back out. People threw bricks into our windows and sprayed graffiti all over the building. The death threats were something we got used to. My being put on the American Nazi Party’s hit list in their magazine was a little bit more unique.
“I can’t help but get emotional when I think about the beginnings of our newspaper. We were in a building with no electricity, no plumbing, and it leaked so badly that we needed a plastic tarp when it rained. Our bathrooms were cans in the basement. At times, the only way we could pay our bills was to use the quarters from the vending boxes.”
And yet, PGN, which celebrates its 40th anniversary next year, has grown to become one the nation’s most respected LGBT weekly newspapers, housed in its own building.
Todd Evans, chief executive officer and president of Rivendell Media (as well as publisher of Press Pass Q), praised Segal “for making Philadelphia Gay News a force to be reckoned, politically, economically, and journalistically in the city of Philadelphia.”
TOP STORY
Volume 17
Issue 8

(What’s happening at your publication? Let us know. Email editor Fred Kuhr at editor@presspassq.com) THE BLADE FOUNDATION announced the hiring of two spring/summer fellows, who will spend 12 weeks reporting on LGBTQ issues while being mentored by Blade editors. CARIS WHITE, a junior […]

by Joe Siegel After two years of virtual Pride celebrations due to the ongoing COVID-19 pandemic, many cities around the country are once again holding in-person festivities. LGBTQ media outlets are doing their part to promote the return of in-person Pride. Angela […]

by Joe Siegel Past and present writers and editors of San Francisco’s Bay Area Reporter (BAR) gathered for a series of online forums to celebrate the publication on its 50th anniversary. The 12th and final instalment of the forums, called BAR Talks, […]

by Randy Stern(Randy Stern is the new managing editor of Lavender Magazine, based in Edina, Minn. The following column ran in the magazine’s March 10, 2022, issue and appears below with permission.) It is my great honor to introduce myself as the […]


Bravo to a hero of LGBT rights!

SIDEBAR: The Advocate serializes Mark Segal’s “And Then I Danced”