Skip to content
by Chuck Colbert
For its OUT 100 issue, OUT Magazine has named President Barack Obama as “Ally of the Year,” with a photo of Obama gracing the cover. This marks the first time in history that a sitting president has been photographed for the cover of an LGBT publication, according to the magazine. The OUT 100 issue includes an exclusive interview with the president in which Obama discusses marriage equality as well as other initiatives that are changing the LGBT landscape in America. 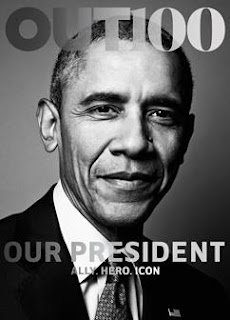 Here are some selected quotes from the Obama OUT cover story.
On his administration’s key focus on LGBT equality: “One of the reasons I got involved in politics was to help deliver on our promise that we’re all created equal, and that no one should be excluded from the American dream just because of who they are. That’s why, in the Senate, I supported repealing DOMA [the Defense of Marriage Act]. It’s why, when I ran for president the first time, I publicly asked for the support of the LGBT community, and promised that we could bring about real change for LGBT Americans.”
On the Supreme Court’s Obergefell v. Hodges decision: “There had been a remarkable attitude shift — in hearts and minds — across America. The ruling reflected that. It reflected our values as a nation founded on the principle that we are all created equal. And, by the way, it was decades of our brothers and sisters fighting for recognition and equality — and too frequently risking their lives or facing rejection from family, friends, and co-workers — that got us to that moment. So I wasn’t surprised by the Supreme Court’s decision, but, like millions of Americans, I was proud and happy that it came down the way it did — and I was honored to stand in the Rose Garden and reiterate for every American that we are strongest, that we are most free, when all of us are treated equally. I was proud to say that love is love.”
On the controversy surrounding Kentucky clerk Kim Davis: “I am a man of faith and believe deeply in religious freedom, but at the end of the day, nobody is above the rule of law — especially someone who voluntarily takes an oath to uphold that law. That’s something we’ve got to respect.”
On the first influential gay person in his life: “I’m not sure who the first openly gay person I met was, but Dr. Lawrence Goldyn, one of my college professors, is a man who stands out to me. I took his class freshman year at Occidental. I was probably 18 years old — Lawrence was one of the younger professors — and we became good friends. He went out of his way to advise lesbian, gay, and transgender students at Occidental, and keep in mind, this was 1978. That took a lot of courage, a lot of confidence in who you are and what you stand for. I got to recognize Lawrence last year at our Pride Month reception at the White House, and thank him for influencing the way I think about so many of these issues.”
On the generational difference in the attitudes towards homosexuality: “To Malia and Sasha and their friends, discrimination in any form against anyone doesn’t make sense. It doesn’t dawn on them that friends who are gay or friends’ parents who are same-sex couples should be treated differently than anyone else. That’s powerful.”
OUT’s full cover story with the OUT100 2015 “Ally of the Year” President Barack Obama is available online at:
http://www.out.com/out100-2015/2015/11/10/out100-2015-cover-revealed-president-barack-obama.
IN THE NEWS
Volume 17
Issue 8