Skip to content
by Chuck Colbert
Tracy Baim, published author as well as executive editor of Chicago-based Windy City Times, has a new book out. “Barbara Gittings: Gay Pioneer” is the first full-length biography of the woman who has been called the mother of the gay-rights movement. Award-winning writer Lillian Faderman wrote the foreword for the book.
“As Baim shows, more than any lesbian leader of the 20th century, Gittings kept her eyes sharply focused on the prize of civil rights for gay people,” Faderman wrote. 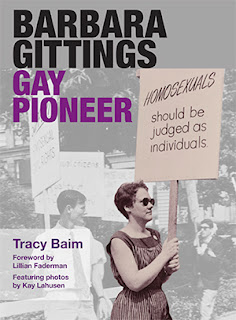 The work of Gittings in the LGBT movement spanned from the late 1950s until her death in 2007. Her partner in life, Kay Lahusen, photographed many of the movement’s biggest actions during the 1960s, and more than 270 photos accompany this biography, making it a historical photo album of the movement.
Gittings was active in a wide range of pre- and post-Stonewall groups, including the Daughters of Bilitis (DOB). She served as editor of DOB’s newsletter, The Ladder. She worked with fellow gay pioneer Frank Kameny on many protests and legal cases fighting government discrimination.
Perhaps most important, Gittings was among the leaders of the push to change the American Psychiatric Association diagnosis of homosexuality as an illness, and she was among those pushing the American Library Association to be more inclusive of gays.
Through email correspondence, Baim explained what prompted her to write the book.
“Her surviving partner, Kay Lahusen, approached me through a mutual friend, Marie J. Kuda. She had seen my previous books, and we had communicated via phone and letters,” Baim explained. “I met her in person about two years ago, and then again last fall. At that point, she agreed to authorize me to work on the project, and the New York Public Library allowed for use of Lahusen’s images, since they now own them. The photos were a key part of what Kay wanted in the book, so that was half the battle. It was an honor to be asked by Kay to do this, because she and Barbara had always wanted to do this project when Barbara was alive.”
Praise for Baim’s new book comes from a variety of sources.
“This first and deeply moving biography of Barbara Gittings, pioneer of lesbian political activism, dramatically evokes a past of open, outrageous anti-homosexual discrimination,” said author Jonathan Ned Katz, co-director of OutHistory.org, in a press release. “Today’s radically different world was first imagined and then begun to be built by daring activists like Gittings.”
Author and historian John D’Emilio said in a statement, “Tracy Baim brings Gittings to life in this captivating and inspiring biography. Skillfully combining Gittings’ own words with accounts of her activist campaigns, this biography makes clear how much Gittings accomplished. A committed activist for five decades, Barbara Gittings truly changed the world.”
“Barbara Gittings just about leaps from the pages of Tracy Baim’s celebratory biography of the gay rights movement’s happiest warrior,” said Eric Marcus, author of “Making Gay History,” in a press statement. “Determined, persistent, persuasive, and wicked smart, Barbara wielded her smile like a machete, demolishing all demagogues and fools who got in the way of what she knew to be true about herself and the rest of us. How lucky were we that she was born at a time when we so desperately needed her to help blaze our path to freedom.”
“Tracy Baim has captured the life and legacy of the mother of gay liberation in America with this book. Barbara Gittings would have loved it. Another incredible book on our history,” said Rev. Troy Perry in a statement.
Bob Witeck — president and founder of Witeck Communications, a firm that specializes in strategic public relations and marketing communications for corporate and non-profit clients — offered his perspective. “I consider Barbara Gittings one of our movements’ most strategic and forceful intellects,” he said in email correspondence. “She was as obdurate and determined as Frank Kameny, but wore kid gloves and not boxing gloves. Baim is absolutely right about Barbara’s pre-eminent place in our movement, and seems she is too often neglected. She and Frank were like a crazy couple, with Barbara’s steady, strong intellect and warm voice, while Frank pierced authority and ear drums on a regular basis. Great complements to one another, especially pre-Stonewall.”
Baim is the author of 11 books on LGBT history, including
editor and co-author of “Gay Press, Gay Power: The Growth of LGBT Community Newspapers in America” (2012), a finalist for a Lambda Literary Award and a Top 10 selection from the American Library Association GLBT Round Table.
(“Barbara Gittings: Gay Pioneer” is available for purchase at http://www.amazon.com/Barbara-Gittings-Pioneer-Tracy-Baim/dp/1512019747.)
IN THE NEWS
Volume 17
Issue 4

(What’s happening at your publication? Let us know. Email editor Fred Kuhr at editor@presspassq.com) AEQUALITAS MEDIA, based in Chicago, announced that it has partnered with leading LGBTQ-owned tech firm REBEL MOUSE, led by ANDREA BREANNA, who is the former chief technology officer for […]

by Joe Siegel The 2021 national convention of NLGJA: The National Association of LGBTQ Journalists was held from September 9 to 12. Due to the coronavirus pandemic, for the second consecutive year, the event was held virtually. “Our goal with this national […]

by Joe Siegel In January of this year, the thirty-five-year-old LGBTQ publication QNotes, based in Charlotte,N.C., launched the creation of a new online publication to innovate the way the LGBTQ community in the Carolinas shares its stories, documents its lived experiences, and […]

by Joe Siegel The annual NLGJA convention was held virtually again this year because of the risks attached to the coronavirus pandemic. It’s not a surprise, then, that COVID was a hot topic at the gathering. One of the forums at the […]

by Fred Kuhr The Washington Blade’s continued cooperation with Cuban journalists has allowed the D.C.-based publication to cover harrowing news stories happening to Cuban LGBTQ people as well as the journalists themselves. On July 11, Maykel González Vivero, editor of the Blade’s […]

by Finbarr Toesland(Finbarr Toesland is an award-winning journalist committed to illuminating vital LGBTQ stories and underreported issues. His journalism has been published by NBC News, BBC, Reuters, VICE, HuffPost and The Telegraph. The following piece appears courtesy of and with permission from […]

COVID-19 on the minds of journalists at NLGJA convention