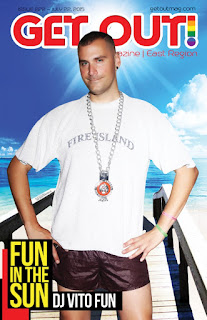 Press Pass Q: What part of Get Out is the most popular?
Publisher Mike Todd: For Get Out! Magazine, we have featured everyone from an Oscar winner to a Grammy winner, to local talent, bartenders, to someone starting up their own business.  The best response is watching the cover personality see their covers and interview on release day.
PPQ: Who came up with the name and what is the inspiration for it?
Todd: I came up with the idea of launching a gay guide to the New York City area when the economy was going down and seeing people staying home more often than going out, that was the birth of G.O.O.T.H, meaning Get Out of the House, shortened to Get Out! in 2010.
PPQ: What challenges are you facing right now?
Todd: Right now we are facing a new competitor that will try to capture advertising by lowering their prices to compete one on one with Get Out! Magazine in the Manhattan area.
PPQ: Do you see yourself as an ‘activist journalist’? If so, in what way?
Todd: I don’t foresee myself as an activist journalist, however we are a community magazine that offers input from the readers and nightlife personalities and the venues.
PPQ: Do you have any changes planned for Get Out! Magazine?
Todd: As for now, Get Out! continues to dominate the market in New York City and surrounding areas, so we will keep doing what we had started out doing. There are no changes in the near future.
PPQ: What is the biggest story Get Out! Magazine has reported?
Todd: The biggest stories would be our international recording artists such as Oscar-winner Jennifer Hudson as well as Annie Lennox, Fran Drescher and Brooke Shields interviews.
PPQ: What advice do you have for others working in LGBT media?
Todd: For other media companies, I would suggest keeping your magazine racks filled in. That’s the best thing you can do to keep advertisers coming back.
PRESSING QUESTIONS
Volume 17
Issue 4

All 32 years of Dallas Voice now digitized and online