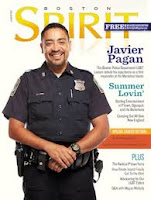 Zimmerman: I came up with the name after doing a thesaurus search for the word “pride.” The name “Boston Spirit” gives off a positive, uplifting feeling.
PPQ: What challenge has your publication had to overcome over the past few years?
Zimmerman: Well, like everyone else, it was tough when the economy crashed. Advertising was down everywhere. We also launched in the market as complete unknowns, that was really hard. At the beginning we would hear, “Boston Spirit? Never heard of it,” all the time. We had to work very, very hard on branding, visibility, and credibility. More recently, the challenge is always remaining fresh and relevant, coming up with new and exciting ideas so we don’t get stale.
PPQ: What challenges are you facing right now?
Zimmerman: These days we are trying to improve our online experience and social media. The magazine is doing well and our events are doing well, but we want to make sure we are able to round out our portfolio. We also spend time trying to come up with new and fun events for our readers. We are always very cognizant of moving the ball forward. We don’t want to produce the same product year after year.
PPQ: How has Boston Spirit changed since it was first launched?
Zimmerman: Our events have really grown a lot. When we started there was no LGBT Executive Networking Night. Now we get 1,000 people each spring. In Boston, and other places, the corporate world has really embraced diversity and inclusion in the last few years and we have tried to tie into that growth. Our event calendar has really improved since we first started.
PPQ: What one change would you like to make?
Zimmerman: I would like to expand our footprint throughout New England. We have a great subscriber base in Massachusetts, and I think we can be a stronger regional magazine and make a greater impact on the other New England states.
PPQ: Do you see yourself as an “activist journalist”? If so, in what way?
Zimmerman: Yes and no. Because the magazine is published six times per year, we tend to focus more on larger feature stories versus the big news of the day. Some of those features might have an “activist” theme, but if they do it is only by coincidence.  We approach a story because we feel it is a good story that our readers will appreciate, not just to “make waves.”
PPQ: What’s the most surprising feedback you’ve received from a reader?
Zimmerman: We had a gentleman on the cover of the magazine several years ago. Shortly after the issue was published, I saw him at an event. He told me that another gentleman recognized him from the cover and they struck up a conversation. They wound up getting engaged after dating for a while. We also did a story on a transgender inmate who had sued the state of Massachusetts to pay for gender reassignment surgery.  After that story ran, I had a reader call me a “sick son of a bitch.”

PPQ: What is the biggest story Boston Spirit has reported?

Zimmerman: We got an exclusive one-on-one interview with Michelle Kosilek for an article we ran in March 2014. Kosilek is [the above-mentioned] transgender inmate who was convicted of murdering her wife about 30 years ago. Kosilek sued, saying the state should pay for her gender reassignment surgery — and she won, and has won several appeals. That story generated a lot of interest and feedback. We also ran a story several years ago regarding Mitt Romney when he was running for president. The story was about a meeting that took place when Romney was governor of Massachusetts. He met with several same-sex couples who were trying to educate him on marriage equality. He was extremely rude to them. The story was incredible and got picked up in dozens of other media outlets. It appeared on Boston.com and received more than 30,000 shares.
PPQ: What advice do you have for others working in LGBT media?
Zimmerman: Look outside of LGBT media for ideas and inspiration. Look at what successful B-to-B publications are doing, successful mainstream publications. Don’t get stuck inside just the LGBT world. Some of the best ideas we’ve had have come from the strangest places. I am big on the idea that if you are doing the same thing you were doing five years ago, you’re in trouble.
TRANSITIONS AND MILESTONES
Volume 17
Issue 3

OutSports’ Cyd Zeigler to be honored for groundbreaking coverage