Skip to content
by Joe Siegel
Columbus-based Outlook Media is publishing its first-ever wedding guide for same-sex couples, in addition to sponsoring a number of LGBT Wedding Expos around the state.
This is somewhat unusual since marriage equality is not the law of the land in Ohio.
Love Big LGBT Wedding Expos “offer a safe and welcoming place for LGBT couples to meet vendors who are committed to marriage equality and excited to serve the LGBT community,” said Christopher Hayes, publisher of the Love Big LGBT Wedding Guide. 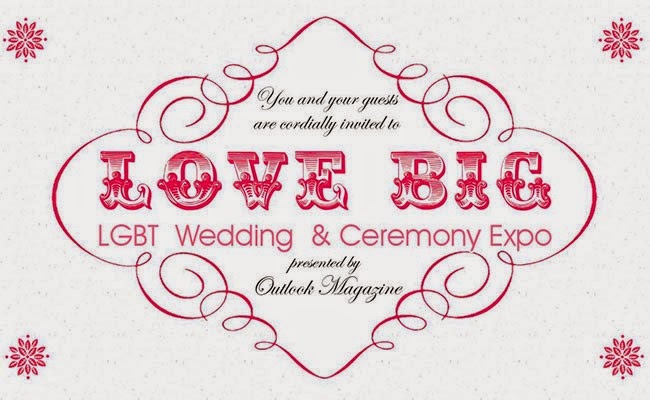 The Love Big LGBT Wedding Guide is a free, full color, perfect bound 9″ x 10.875″ premium paper stock magazine featuring equality-minded vendors servicing the Ohio market. The advertorial-focused guidebook is complimented by original industry-focused content. Fifty thousand copies of the magazine with be distributed statewide annually to wedding vendors, shops, universities, restaurants, coffee houses, libraries, community centers and subscribers.
Complimenting the print magazine, The Love Big On-Line Directory is an interactive resource for consumers interested in equality-minded vendors.
Ohio does not legally recognize same-sex unions, so LGBT couples have to go out of state to get their marriage licenses.
Hayes explained that more and more Ohio same-sex couples are choosing to hold their big religious ceremonies and receptions back in the Buckeye State.
The first expo was held last year in Columbus and was so well-received that Outlook expanded to other cities in Ohio.

The first Love Big Wedding Expo in the series will be held at Hollywood Casino in Columbus on Sunday, June 2. The event was originally scheduled for March 22, but had to be rescheduled due to what the newspaper called an “inner-office emergency.”

“Though we regret having to move the expo, we are excited to be able to kick off Pride month with this community event,” said Hayes. “With the [U.S.] Supreme Court scheduled to release their decision in June on whether same-sex marriage will be legal in all 50 states, there couldn’t be a more relevant time to hold Love Big.”
With the rescheduling of the Columbus Expo, Love Big Dayton will now kick off the series. Dayton’s expo will be at the Hilton Garden Inn Dayton/Beavercreek on Sunday, April 26. This event will feature wedding and ceremony vendors from across the Miami Valley and beyond. Additionally, the expo will feature a fashion show curated from local and national designers, a singles bar with speed dating, brunch, specialty cocktails and special performances from drag comedy troupe The Rubi Girls.
Other expos in Cincinnati, Cleveland and Toledo will be held in the fall. Dates and locations will be released in the spring.
Part of the proceeds from the expos will go to Why Marriage Matters, an education initiative created by Equality Ohio.
IN THE NEWS
Volume 16
Issue 12