Geographic coverage area: Greater Kansas City and select cities in Kansas, Missouri, Illinois, Iowa, Nebraska and Arkansas.
Year founded: June 2004
Staff size and breakdown [writers, sales reps., etc.]: Independently owned by John Long and CampOut LLC.  Writers are freelance and vary from 10-15 per issue on average. Two positions are contracted to a graphic designer and editor. One distribution person. No sales representative; publisher and editorial director John Long does that.
Physical dimensions of publication: Magazine trim size 8 1/4” x 10 1/4”
Average page count: 32 pages
Print run: 5,000 copies on average
Website: www.campkc.com
*****
Press Pass Q: What part of Camp Magazine is the most popular?
Publisher John Long: I’d say community stories about individuals or organizations in the LGBT community. Camp is not a lifestyle publication and therefore we focus on community news in both current LGBT events and local entertainment. However we’re also known for our creative covers and often feature the actors of the satirical Late Night Theatre ensemble in their productions. I’ve been told by many readers that they look forward to our issues every month just to see our covers.
PPQ: Who came up with the name? What does it mean? 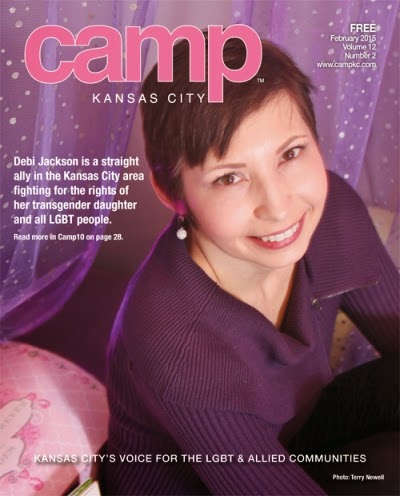 Long: The founding owners were Jim Gabel and myself. We were actually surprised when we did the trademark search that there were no other LGBT magazines with this iconic name and we created a national trademark. There are a few gay bars around the world named Camp or Kamp. We came up with the name for two reasons. The primary definition is because we serve the LGBTQ and allied communities so in that sense we are all in the same camp of “similar ideals” as well as the more theatrical use of the word “campy.” We use the dictionary definition of the word as such: Camp (1) (kamp) n. a group of people with the same ideals. Camp (2) adj. exaggerated in style, especially for humorous effect.