Skip to content
by Chuck Colbert
A glossy LGBT newsmagazine based in the nation’s capital achieved a significant milestone earlier this year when Metro Weekly celebrated its 20th anniversary. To mark the occasion, staffers published a 112-page commemorative issue featuring a retrospective spotlight on the publication’s history, including 20 interviews, 20 features and 20 questions pertaining to the magazine.
The May 1 issue also contained two pieces looking back on the publication’s two decades worth of providing news, politics, opinion, arts and entertainment, and “Scene” photographs from events and venues. In fact, the “Scene” section has archived more than a 100,000 photos from Washington LGBT community events online. 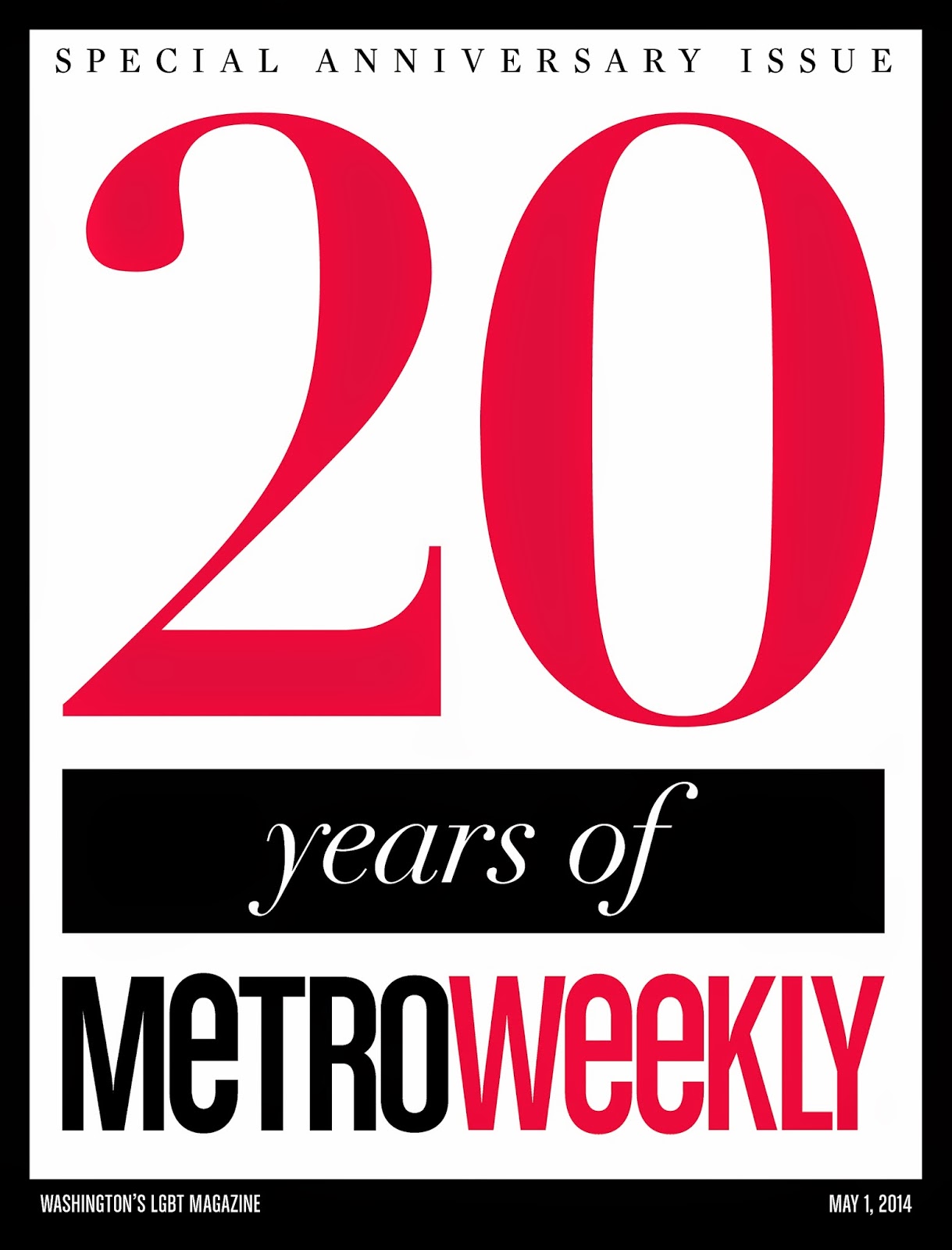 In the 20th anniversary issue, here’s how founder, publisher and editor in chief Randy Shulman recalled the first issue of Metro Weekly:

“Running around frantically in my tiny apartment at the corner of 17th and T Streets, [I was] scrambling to get the very first issue of Metro Arts & Entertainment Weekly written and to the printer,” he wrote. “I don’t have clear, detailed memories of it, apart from recalling that pages were laid out in PageMaker on a monochrome IBM computer — floppy disks! — printed out on a cheap black and white laser printer, and then pasted onto templates through the aid of a hot-glue gun. The pages were then bound into a loose-leaf three-ring binder — ‘the book,’ as it came to be known — which was then raced to the printer by car and handed off, relay style, to the camera department. From there, I always said, ‘It’s in God’s hands.’ God, in this case, being the printing press, which would not break down and create a distribution delay. God forbid.”
Over the years, changes came, including the name change (from Metro Arts & Entertainment Weekly to Metro Weekly), as well as changes in format (to full glossy magazine in the last few years).
And yet, Shulman said, the mission remained constant: “To create a magazine — and a website — that speaks to the LGBT community, locally and beyond, in a literate, interesting and, whenever possible, unique way,” he wrote. “A magazine that covers things that are more than just LGBT-oriented, because as LGBT people, we are interested in things beyond our own microcosm.”
For Shulman and Metro Weekly, the advance of LGBT rights and the changing landscape of LGBT equality played pivotal roles, featuring prominently in the publication’s coverage at the same time the media landscape transformed rapidly and significantly.
“The fight for equality has begat same-sex marriage, the end of ‘Don’t Ask, Don’t Tell,’ and a rise in our awareness and a fuller understanding of our transgender brothers and sisters,” he wrote. “These two decades have seen monumental advances in combating HIV/AIDS, though we’ve lost so many in that time and still have such a long way to go. And the view, from 1994 to 2014, has changed so dramatically that we routinely browse the world outside our all-too-often confining borders thanks to this little always-connected thing they call The Interwebs. These changes have been reflected in our pages, often through the words of the people who were working hard to implement them.”
During a telephone interview, Shulman added, “I’ve always put a prize on putting out a quality, creative, interesting, engaging publication. We are a unique magazine in the way that I think a magazine should read. I always joke that Metro Weekly is a gay version of The New Yorker.”
Shulman’s philosophy guides the magazine’s style. “There’s a Metro Weekly way to things, a Metro Weekly way to write articles, a Metro Weekly way to do Q&As,” he said. “We have a very specific way we do things, a very unique approach that is important to Metro Weekly’s history.”
For his part, Sean Bugg, who over the years served as both the magazine’s editor and co-publisher, offered a first-person perspective.
“Twenty years ago when Metro Weekly first came off the press, it was a lot like me at the time: a little slapdash, bursting with energy and a bit naïve,” he wrote in the anniversary issue. “I mean all those things in a good way — it was slapdash because we had an idea for a magazine and simply decided to plow ahead. It was a moment when naiveté paid off because the young rush in where experience fears to tread.
“We went by our nickname ‘MW’ in those days, one of the many ways in which the magazine then is different than the magazine today. It was smaller then, designed for easy pick up in the days when our distribution was limited to bars, restaurants and a couple of retail stores. It was black and white with spot color — ‘spot color’ being a difficult concept to explain to a generation that grew up with home printers that output high-res rainbows in seconds flat.
“The magazine now goes by its given name and at a glance is a barely recognizable adult compared to its newsprint youth. Metro Weekly lives in a different package these days. And what lives in that package today is different from what popped into existence 20 years ago. As you’ll see when you page (or scroll!) through this issue, our scope has changed and our ambition has grown. But you can recognize us between the lines and behind the design of those first few years — the hunger for interesting stories, the commitment to excellent writing, the willingness to try new things and push the boundaries of what a gay publication could be.”
All in all, Bugg wrote, “A magazine is more than a stack of stapled paper or a hosted web domain. A magazine is an attitude toward and a passion for a particular realm — for Metro Weekly, that attitude and passion always has been for our lesbian, gay, bisexual and transgender community. That’s what I see when I look back on the amazing journey we’ve taken from the spring of 1994 to today. The package may have changed and the approach may have matured, but I’ll always recognize the passion on the page.”
During a telephone interview, Bugg said he was “very proud” of the staying power of the magazine that “went through a lot of evolutions. We have done things with a non-traditional attitude. That attitude and the focus on writing and stories that are interesting and entertaining,” he added, distinguish Metro Weekly and explain the role it plays in the nation’s capital and beyond.
At the end of 2013, Bugg left Metro Weekly and is now executive director of the Next Generation Leadership Foundation. He remains the magazine’s editor emeritus and an occasional contributor.
Metro Weekly publishes every Thursday with a circulation of 17,500.
IN THE NEWS
Volume 16
Issue 6