Skip to content
by Chuck Colbert
The Religious Freedom and Marriage Fairness Act passed the Illinois House of Representatives on Nov. 5, 2013, and Gov. Pat Quinn signed the measure into law on Nov. 20. That made Illinois the 16th state to get equal marriage rights. The law took full effect on June 1, 2014.
While it took less than two years to bring marriage equality to the Midwest’s most populous state, the road to same-sex marriage there was no easy route. Rather, the bumpy terrain required the LGBT community and its allies to exert considerable financial and political pressure. It also stirred passionate internal battles that put heat on elected officials in the final days of the legislative session.
All of which is detailed in a new book, “The Fight for Marriage Equality in the Land of Lincoln,” from Windy City Times writers Kate Sosin and Tracy Baim.
As the book’s back cover explains, “Money. Votes. Activism. These three ingredients were key to the passage” of marriage equality in Illinois. “There were protests, benefits, phone banks, door-to-door canvassing, lobbying in the Capitol building and a 5,000-strong March on Springfield for Marriage Equality on Oct. 22, 2013. This was the first time thousands of LGBTs and allies came to the state’s capital, from all parts of Illinois and even neighboring states, to push for equality.” 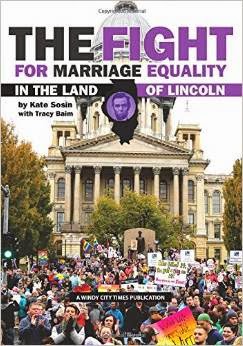 The 270-page book, which includes dozens of pages of photos and graphics, stems from more than four years of reporting and more than 100 interviews. Consequently, Windy City Times reporting resulted in “on-record verified sources, quotes and facts,” the authors note. “Our goal in producing this book has been to dig out the most complete, interesting and honest story about the journey of the Illinois marriage bill.”

Sosin is a former senior reporter and associate editor of the Chicago-based LGBT publication. She closely covered the battle for same-sex marriage from before the bill’s introduction in 2012 to its passage in 2013.
Baim is publisher and executive editor of Windy City Media Group, which produces Windy City Times, Nightspots and other gay media in Chicago.
Baim, in email correspondence, said it was important for Windy City Times to take its reporting to the next level in book form because “the process to get marriage equality in Illinois was complex and involved a lot of people and groups. While we covered it on a daily and weekly basis for the paper, I felt having it all in one place for a book was important to document for historical purposes. Also, some people could more freely speak once the process was over, saying things to us they couldn’t during the campaign. We ran hundreds of photos during the year, but it was also nice to put the best into one book.”
Baim said she hopes the book contributes to LGBT history writing by “placing the Illinois marriage battle in the context of the national movement, as well as showing how politics in Illinois shaped the fight for equality in the Land of Lincoln.”
Asked what she learned in pulling the book together that was perhaps not so obvious while on the front lines of battle, Baim replied, “I learned which groups and individuals played a more significant role than was previously known, and some others who took a lot of credit really were ineffective in their efforts and focused more on fundraising than actual work. I also learned that it was clear that both inside and outside pressure contributed to the passage of the bill.”
For her part, Sosin explained that she, too, gained a broader perspective on the marriage battle with some distance from reporting on it. “When we covered the bill and did not see it pass, we were thinking everything else is important — all these other issues are taking precedent. Democratic [Party] politics is kicking this bill around,” she said over the telephone. “But the opposite is actually true. This bill has changed the Democratic make of the [state] assembly for years to come. Progressive issues and the way they pass will be impacted by marriage equality because the LGBT community put money and energy into a Madigan majority. And the consequences of that, of course, Madigan had to pass this bill.”
Sosin was referring to Michael J. Madigan, Speaker of the Illinois House of Representatives. In the 2012 November general elections, Democrats won big in state legislative races, giving them a veto-proof supermajority in both the House and Senate. Madigan’s political prowess is largely thought to be responsible for the victory.
Asked about take-away lessons from the Illinois same-sex marriage battle, Sosin replied, “I think we have to ask ourselves how we want to win and what we sacrifice to do that because, I think, in Illinois from the start, it felt like really going back to the longtime activists to be cut out of this [campaign] — at every level. So there is a question of, at what cost? What are you willing to give up to win, and do you want to become part of a party? Because I feel like this campaign became synonymous with the Democratic Party’s priorities, and it didn’t necessarily help the campaign — at least in the spring.”
Sosin was referring to a decision by the bill’s chief sponsor in the House, Greg Harris, an openly gay lawmaker, not to call for a vote on the marriage bill, a move that triggered backlash against him and Illinois Democrats.
Like Baim, Sosin said another lesson for her “from asking lobbyists and activists, the people who worked on this [campaign], was you can’t only do an outsider strategy, and you can’t only do an insider strategy. Both components need to be applying pressure in order to pass legislation. The field strategy largely went uncredited” until it picked up “over the summer.”
Over the course of the marriage battle, the role of LGBT media changed, Sosin realized. “Historically, LGBT journalists played the role of telling the story we most needed to hear,” that “of positive, uplifting stories about real people. That role has almost completely changed. These stories are now told in mainstream, and we need them. But, especially now — when we are talking about big money — LGBT journalists need to dig in and investigate. We need to understand where these dollars go and who the players are. We need to understand the cost of winning. And we need a more complicated angle than happy couples smiling in front of cameras.”
Altogether, Sosin said, “The story of the LGBT groups paying for more than they bargained for is probably something somebody ought to look at nationally.”
IN THE NEWS
Volume 16
Issue 5

Indiana-based publications up for sale