Just in time for Pride season, a leading LGBT publication in Southern California and a premier marketing agency teamed up to provide a special supplement to the Los Angeles Times.
Released on June 4 and made available in all copies of the newspaper, the supplement, “What is Gay L.A.?” — produced by Frontiers Media and Flip —  answers the question posed by its title through the diversity of city residents.
It is the first LGBT supplement ever produced by the L.A. Times.
The Times also launched a new LGBT site, latimes.com/lgbt-lalatimes.com/lgbt-la,on June 20.
As Frontiers publisher Michael Turner wrote in the supplement, “Be proud of who you are, Los Angeles, and in the coming weeks we’ll celebrate our friendship right alongside our freedoms.”
Award-winning artist Edel Rodriguez created the supplement’s cover illustration for Frontiers. 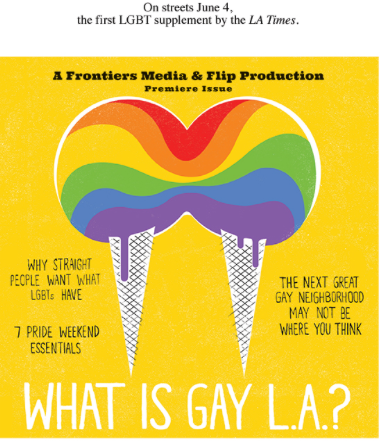 “What is Gay L.A.?” spotlights an open and accepting community at the same time it probes how those under the LGBT rainbow enrich their localities.
The supplement features an essay by news editor Karen Ocamb asking some other questions: “Who really won the sexual revolution?” and “What do gays have that straight people want?”
It also includes a perspective from AIDS activist Jewel Thais-Williams, founder of the legendary African-American gay bar, The Catch, who suggests, “L.A. is probably one of the gayest cities in the world.”
In the supplement, West Hollywood Mayor John D’Amico wrote, “Yes, I do think there is a Gay L.A. sensibility, and it’s my sense that it’s centered around invention and optimism. I find that so many LGBT people I meet have moved here to Southern California from other places in the country or around the globe. They chose L.A., and they’re committed to the idea that this is the best place for them to invent their lives. It’s the Wild West, and it’s full of opportunity.“
Another Angeleno offer an historical perspective.
“As a gay elder of 91, I have seen many faces of the big question: Is there a distinctly Gay L. A. sensibility? Yes, of course,” wrote civil rights activist Malcolm Boyd. “It is a combination of climate, the archives at USC, the genius of Harry Hay, role models like Jim Kepner and so many other gay and lesbian pioneers, the annual Pride Parade, the integrity and leadership of Sheila Kuehl, the benign presence of the ubiquitous movie world and the sheer volume of gay people seeking freedom. And not because L.A.’s distinct gay community is already a reflection of the global! L.A.’s gay images instantly flash around the world. West Hollywood and Silver Lake bump into the universal LGBTQ scene with alacrity, glamour, political significance and deep spiritual meanings.”
The supplement was produced by Frontiers Media and Flip.
Led by Tom Whitman, Flip is an integrated marketing agency that helps major brands connect to the LGBT community. Whitman is an L.A.-based event producer, club promoter, filmmaker, and philanthropist and is considered one of the most successful club promoters in L.A.’s gay nightlife scene, according to the New York Times and Wikipedia. Whitman is also known for his work in television at MTV Networks and his short films, “The Rape of Ganymede” and “Sexy.” OUT Magazine named him one of 100 People of the Year 2008.
Founded in 1982 by Greg Carmack and Jerry Hyde, Frontiers helped give a face to the emerging gay culture of the time and promoted cityhood for West Hollywood. Bob Craig joined Frontiers in 1983 and soon became the sole owner. Frontiers is distributed throughout Southern California, covering Los Angeles and West Hollywood extensively, with a focus also on communities as far away a Long Beach, Orange County, Palm Springs and San Diego.
(Material from Dominic Preston was used for this reporting.)
IN THE NEWS
Volume 16
Issue 4