Geographic coverage area: Long Island including Fire Island and The Hamptons. Distribution also includes Penn Station in Manhattan and the borough of Queens.
Year founded: 2012
Staff size and breakdown [writers, sales reps., etc.]: 4 full-time employees, 10 writers and 2 sales reps.
Physical dimensions of publication: 9.75” x 12.5”
Average page count: 44
Key demographics: 45% of Living Out’s readership is between 35-44, 25% between 25-34, 17% 55+ and 13% between 18-24 with an even split on gender.
Print run: 15,000 monthly
Website: www.livingoutli.org
*****
Press Pass Q: What part of Living Out is the most popular?
Publisher David Kilmnick: There is no one “most popular” part of Living Out. Feedback from readers indicates an even split between enjoying the vast amount of news provided, both local, international and national, the thought provoking op-ed pieces, travel columns, Be Scene photo section and celebrity interviews, and arts and culture. We continually receive great feedback about the design and layout of the publication as well.

PPQ: Who came up with the name for the publication? 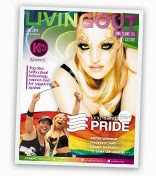 Kilmnick: Sitting around a small round table brainstorming for hours,  a group of four including myself as publisher, the editor and art director came up with the concept and name. The premise of Living Out is the “LI” in the beginning and OUT at the end. Long Island is a fascinating place to live with no “gayborhood.” Long Island’s LGBT community is integrated into all towns, cities and villages and we wanted folks to be able to walk into their local grocery or drug store, pick up an LGBT publication and be able to live “out” and “proud” no matter whether they resided on the New York City border in Mineola or 120 miles further east on the tip in Montauk.
PPQ: What challenges has your publication had to overcome?
Kilmnick: The biggest challenges we had to overcome was the expansive geographic area we cover. Long Island is home to more than 3 million people and is the largest contiguous island in the United States. Having the publication accessible to all of Long Island was very important to us and we have been able to achieve that.
PPQ: How has your publication changed since it was first launched?
Kilmnick: The biggest change that we made since we first launched in 2012 was taking over operations of printing and distribution ourselves. Initially we worked with a local alternative weekly paper to handle the printing and distribution for us. Another change was having to increase the print run as Living Out flies off the racks.
PPQ: What one change would you like to make?
Kilmnick: The biggest change we would like to make is actually an addition. We are working on developing a home subscription program to give the option for people to receive Living Out in their mailbox.
PPQ: Do you see yourself as an ‘activist journalist’? If so, in what way?
Kilmnick: The very nature of reporting and providing information that others are afraid to touch or cannot do so competently makes us activist journalists. We embrace and celebrate the term as we are creating change and challenging minds through Living Out.
PPQ: What’s the most surprising feedback you’ve received from a reader?
Kilmnick: The most surprising feedback from a reader was around our fourth issue. With Living Out being a 100 percent LGBT publication and after featuring Adam Levine, Lisa Lampanelli and Barbra Streisand on the cover of the first three issues of the publication, it did not occur to us that we had not featured an LGBT person on the cover until one of our readers wrote to us inquiring about why this was the case.

PPQ: What is the biggest story Living Out has reported on?

Kilmnick: The biggest story that we have reported on was our own Long Island hometown hero Edie Windsor, as she single handedly took down the Defense of Marriage Act winning her case in the U.S. Supreme Court and forever changing the lives of tens of thousands of families across the nation.
PPQ: What advice do you have for others working in LGBT media?
Kilmnick: The advice that we would have to offer in our young history is that there still is a thirst for an LGBT publication that people can hold in their hands. The visibility of LGBT media goes beyond providing information and news. It provides a sense of community and belonging and it helps to educate the masses and change lives for many individuals and families.