Out Front Colorado publisher Jerry Cunningham was not at all that surprised with so much good news in The Gay Press Report for 2013. But, he said, “If we had this conversation a few years ago, I would have been surprised. I was one of the believers that print media was the Titanic. However, I was completely wrong. It’s very validating to know that” Out Front’s success is “not an unique anomaly or weird Colorado magic sauce.”
For Cunningham — and for that matter, LGBT publications coast to coast and in between — local coverage is paramount. 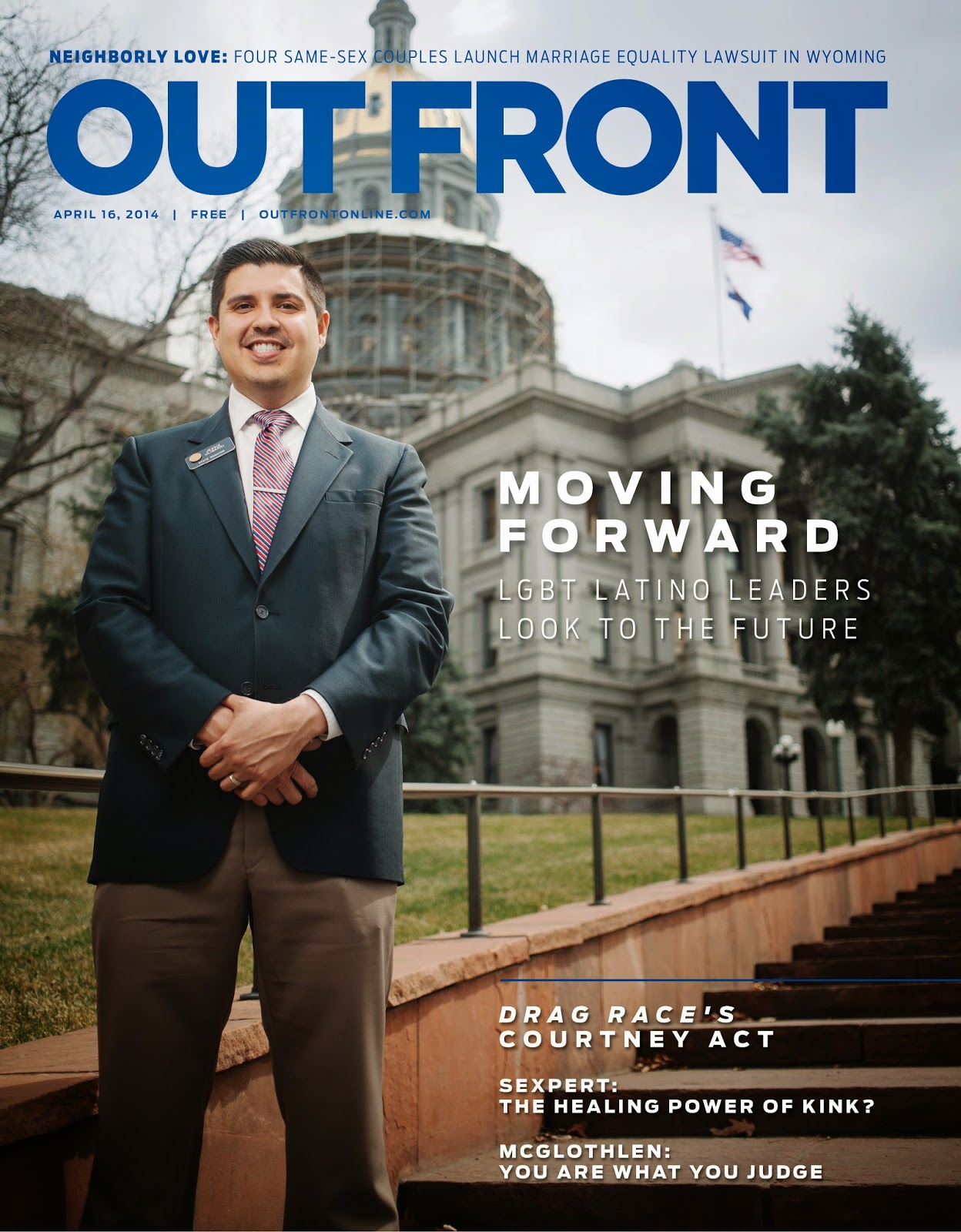 In the Rocky Mountains, to be specific, a key ingredient in Out Front’s “magic sauce,” Cunningham said, is to “concentrate on community members and those who read the publication.”
More to the point, as the publication’s mission puts it: Out Front (www.Out Frontonline.com) is a place “where you belong.”
“It doesn’t matter if you are gay or straight ally,” he explained. “You can pick up the publication and within the first two to three pages of content, you should have a sense of belonging.”
True enough, Cunningham’s approach is philosophical. “All people want in the world is to be accepted,” he said. “People want to be acknowledge for who they are.”
Everybody, Cunningham explained, carries “a sign,” which is a kind of an identity marker saying, “This is who I am.”
At Out Front, “We try to lift up the sign or look under it to see who the person really is deep down inside. What are they committed to and value in life? When you take the time to do that, you create a powerful bond with that person, an extended family relationship. If you acknowledge someone for who [he or she] really [is], which might be different from who they portray themselves to be on their sign, you have a friend for life and a relationship that can last forever. That’s not because you want your publication to thrive. That’s because you want to have an amazing, connected life.”
For LGBTs, moreover, finding acceptance is at times a challenge. “When you are growing up, depending on how you were raised,” Cunningham said, “you are told, ‘Gay is wrong. Gay means you won’t be successful, Gay means you won’t have a family, won’t be married. You will always be less-than in life.’
“So when you figure out you are gay, you spend your entire life trying to fit in, trying to be loved, trying to succeed, and overachieving — always striving to be more than. And I truly believe that’s why there are so many successful gay people. Being creative is what allows [LGBTs] to thrive.”
Altogether, Out Front’s editorial content is 85 to 90 percent locally focused, he said.
“In terms of regional media,” for content, Cunningham said, “we are dialing it in to individuals, which is what Obama did” during the 2012 presidential election, with the campaign’s micro targeting of potential voters.
Sure enough, local coverage dovetails with another piece of Out Front’s “magic sauce” — a three part mix of “engaging content, true brand partnerships, and an engaged audience.”
It’s the affirmation and acknowledgment of people for who they truly are that creates an engaged audience and attracts brand partners, he believes.
For that reason, Out Front is “more than a magazine,” according to its media kit. “We are a social, print, and digital platform for the LGBT and allied community to connect, explore, advocate, communicate, celebrate and exist exactly where they belong.”
With “content as queen,” and by including diverse voices, one overarching goal of Out Front is to connect advertisers — and their various brands — to readers with LGBT news and politics, opinion pieces, local nonprofit and business profiles and legal resources, as well as with coverage of arts and culture, food and restaurants, bars and nightlife, travel and tourism, community sports, celebrities, and national events, along with stories of faith and spirituality, health and fitness, real estate, home design, beauty, fashion, and relationships and sexuality. It’s an all-terrain, three-pronged approach of “focus, social, and living,” according to the media kit.

Out Front by the numbers also provides some hard data behind the publication’s “magic sauce”:

• More than 70,000  readers per month
• 41,000 unique page views
• 1.4 million social media virability
• 28,000 monthly email impressions
• 24 semi-monthly print issues per year
• 100-plus Colorado newsstands
Founded in 1976, Out Front Colorado is one of the oldest and longest running LGBT publications in the country. Its 12,000 copies (usually 48 pages) are published and provided free to readers on the first and third Wednesday of each month, primarily in metropolitan Denver but also throughout the state.
Last November, Out Front published a short video to tell its story: https://www.youtube.com/watch?v=_brictFyqxc&feature=youtube.
In addition, Out Front publishes four quarterly guides throughout the year, including a Living Guide, Pride/Summer Guide, Health & Wellness Guide and Winter Holiday Guide.
A Colorado native, Cunningham and his partner, JC McDonald, acquired Out Front and its parent company, Q Publishing, in January 2012.
“We don’t need to fudge our numbers,” said Cunningham. “Transparency and authenticity” are two key ingredients of our “magic sauce at Out Front.”
SIDEBAR
Volume 16
Issue 1/2

TOP STORY: Ad sales, circulation and readership all up for LGBT media