by Chuck Colbert
A Florida-based LGBT publication nabbed a journalistic coup recently when Tom Dyer, founder and publisher of Watermark, interviewed Charlie Crist, a former Republican governor, now a Democratic candidate for the same office in the Sunshine State.
It was a groundbreaking, first-ever gay press interview for Crist, wherein he explains his party switch, gay marriage support, and why he’d like to be governor again. 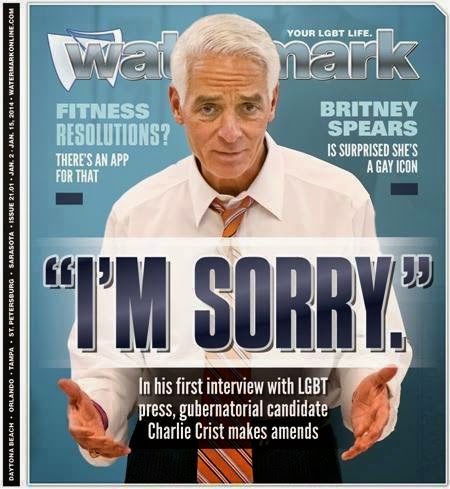 Within hours of its posting on Dec. 31, 2103, on Watermark’s web site, the interview went viral, with other LGBT publications — Dallas Voice, Washington Blade, Windy City Times and Advocate.com — also posting it, thanks in part to Lisa Keen forwarding the Crist interview for her clients’ consideration. (Keen is chief correspondent and founder of Keen News Service, an Associated Press for LGBT news.)

(What’s happening at your publication? Let us know. Email editor Fred Kuhr at editor@presspassq.com) BAY AREA REPORTER, based in San Francisco, was the recipient of the Legacy Award from NLGJA: THE ASSOCIATION OF LGBTQ JOURNALISTS on September 22, 2022, at the group’s annual […]

by Joe Siegel CHICAGO — NLGJA: The Association of LGBTQ Journalists held its annual convention at the Drake Hotel in Chicago September 8-10. Over 600 attended the event, which was held in-person for the first time since 2019. One of the plenaries […]

by Joe Siegel CHICAGO — Some of the discussions at the NLGJA: The Association of LGBTQ Journalists convention addressed the use of language pertaining to gender and ethnic identity. “Gender and Language in Media: What Journalists Can Do to be More Inclusive” […]

by Joe Siegel The member organizations of the media collective News is Out met in Chicago last month during the Local Media Association (LMA) conference in order to discuss their future plans. News is Out, which launched earlier this year, is a […]

by Joe Siegel Project Q Atlanta announced that the publication is going on hiatus. Publisher Mike Fleming explained the decision in a May 6 column. “On Sept. 1, 2008, Project Q Atlanta promised a hyper-local ‘queer media diet’ for Atlanta. The site set out […]

by Tammye Nash(Tammye Nash is managing editor for Dallas Voice. The following column ran in the May 13, 2022, issue of the newspaper. It appears here with permission.) This week, we here at Dallas Voice are celebrating the 38th anniversary of our […]


I would have been more interested in get to the root of the issue, which is that Charlie has been outed by numerous sources on numerous occasions. His previous votes are colored by his own orientation and his attempts to hide it while pursuing the Republican agenda.

SIDEBAR: “I was wrong. Please forgive me”: What Charlie Crist had to say